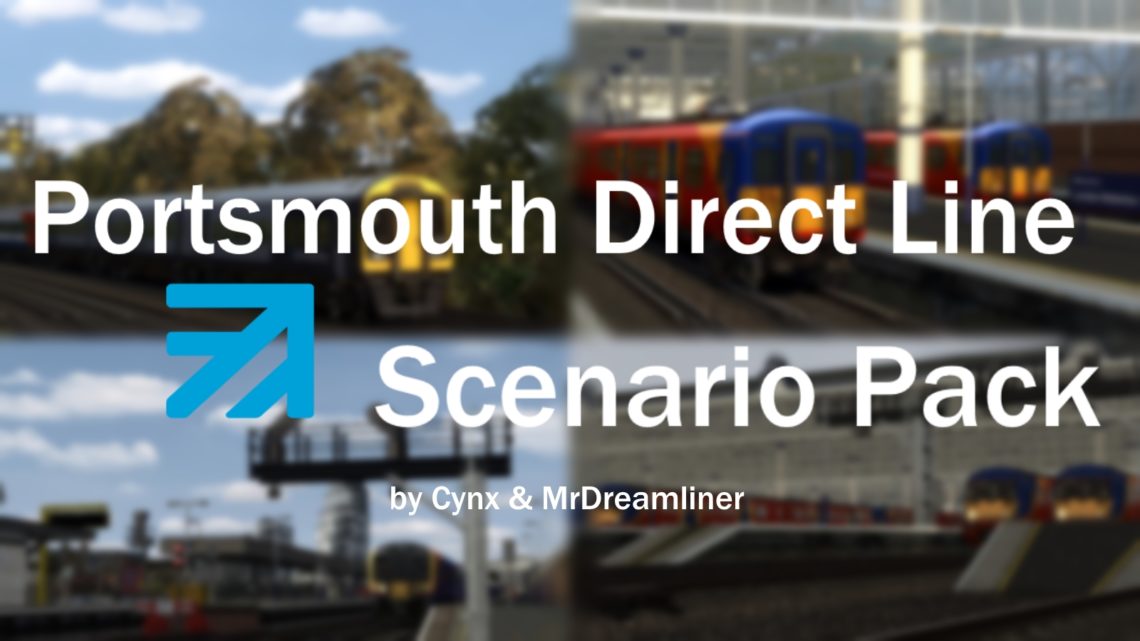 A joint venture between MrDreamliner (Josh Thorpe) and I, we bring you a pack of 10 scenarios for the Portsmouth Direct Line Extended: London to Portsmouth route, covering various operations set in the present day. All scenarios follow the actual timetables and diagrams as closely as possible. An outline of the scenarios included is provided below. PLEASE NOTE: In the game, all of these scenarios’ titles begin with “[PD01].”

CLASS 150/2: 1Z27 Bristol Temple Meads to Portsmouth Harbour
On a clear autumn evening, there is a points failure north of Bristol, and as a result, the 1F27 service from Cardiff to Portsmouth has been cancelled at Filton Abbey Wood. GWR have taken 150207 in Ex-Northern livery and 150232 from the depot and are using it on this service instead of the typical 158. Taking over the service at Cosham, you’ve been delayed so try to make up time en route down south. Good luck!

CLASS 159: 1L91 London Waterloo to Honiton
It’s 21 December 2018, and SWR are operating extra services in and out of Honiton before the holidays begin. These trains have unusual calling patterns, with southbound services calling at Clapham Junction before running non-stop 80 or so miles to Salisbury. You have signed on at 14:46, ready to drive 1L91 to Honiton, as far as Woking.

CLASS 159: 2T69 Basingstoke-Portsmouth Harbour-Fratton C.S.D.
You have just taken over service 2T69 outside Cosham station and you are now in charge throughout to Portsmouth Harbour station. Afterwards, you will then take the unit ECS to the depot at Fratton.

CLASS 444: 1P24 Portsmouth & Southsea to Haslemere
With engineering works on the Portsmouth Direct Line, all services from Waterloo to Portsmouth, via Guildford, have been truncated to Haslemere. You’re tasked with taking a 5 car class 444 up north to Haslemere on a stopping service, but don’t let the snow cause you trouble…

CLASS 444: 1P32 Portsmouth Harbour to London Waterloo
After signing on at 1002, you are now the driver in charge of 1P32 in its entirety, through to sunny Waterloo.

CLASS 450: 1P67 London Waterloo to Portsmouth Harbour
Nearing the end of the day, drive a semi-fast service from Waterloo to Portsmouth. Due to an added ECS move by South Western Railway, this train has additional coaches, being unusually formed of both a class 450 and a class 444. This will give you a 9 car train instead of the normal 5.

CLASS 450: 2L28 Basingstoke to London Waterloo
Every half hour, South Western Railway runs a semi-fast service from Basingstoke to Waterloo, calling at various stations west of Surbiton on the slow lines before diverging onto the fast lines just before New Malden. On a fine morning, you’re rostered with a 12-car class 450 on the 09:24 to Waterloo, starting from Woking. You’ll need to heed to services on the up fast towards Waterloo, can you make it to the Capital safely but on time?

CLASS 455: 5K51 Guildford U.C.H.S. to London Waterloo
This evening, SWR have cancelled an ECS movement from Strawberry Hill to Waterloo due to signaling issues on the Kingston loop, so as a result, they are dispatching a pair of class 455’s at Guildford’s depot. You’ll be taking 45865 and 455707 on an empty stock move to Waterloo to form the 2K51 loop service via Wimbledon and Richmond, but you’ll need to traverse through the busy, lethargic up slow lines of the South West Mainline while battling some mist. Best of luck!

CLASS 456: 2J09 London Waterloo to Hampton Court
After arriving in from the sidings, you are now in charge of a 456 and 455 consist on the Sunday’s only 2J09 to Hampton Court.

CLASS 456: 2J55 London Waterloo to Hampton Court
Tonight you’re in charge of a peak hour service to Hampton Court, calling at all stations on the line. The weather isn’t great, but your class 456, attached to a pair of class 455’s, can surely handle the rain. Best of luck!

REQUIREMENTS
The requirements list for this pack is extremely large, but for the sake of people who simply can’t be bothered to download it to see its requirements, have fun reading!