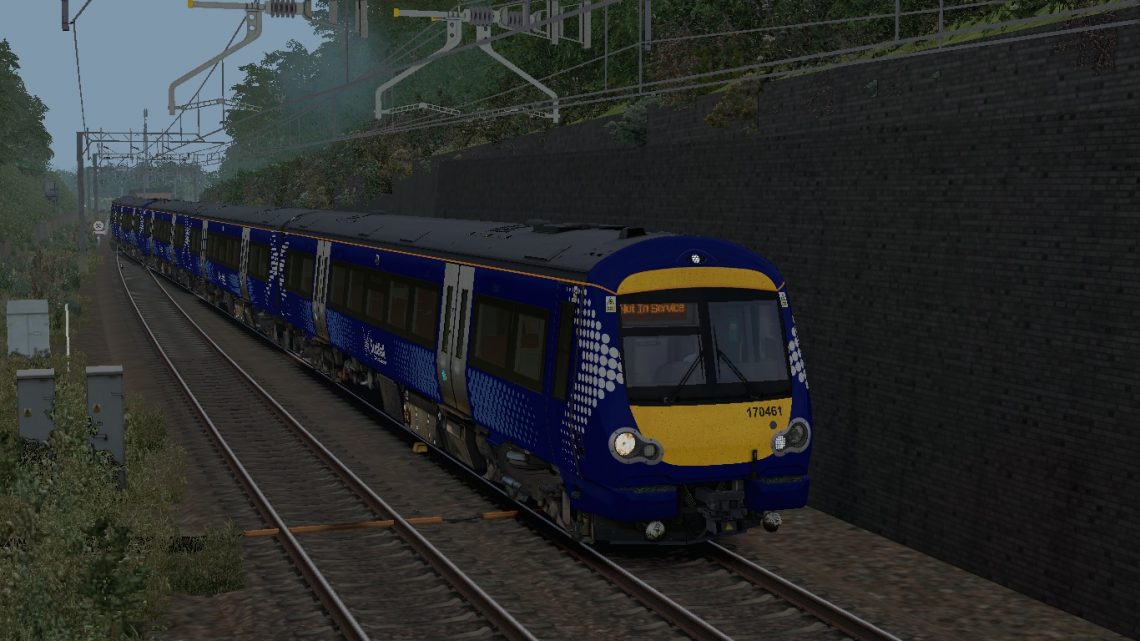 With an operational incident earlier in the day at Perth, units have found themselves out of place prior to the
evening peak services, to counteract this you have been dispatched out of Haymarket Depot with two spare Class 170s where you will take them to Eastfield Depot via Glasgow Queen Street. You will leave Haymarket
Depot and move the units into Haymarket Platform 0 where you will change ends and proceed out towards
Glasgow. Unfortunately due to the busy nature of the area, a path along the E-G has not been found between
Haymarket and Winchburgh Junction, so you will be pathed up to the Dalmeny Down Loop where you will turn around and go over the Dalmeny Curve onto the E-G that way. You will then proceed along the E-G via Falkirk High before arriving into Glasgow Queen Street where you will drop off one of the units before taking the other into Eastfield Depot, where you will do one final task of coupling up with a Class 158 in preparation for the evening peak.

This scenario was made thanks to the archived timetables found on https://www.dpsimulation.org.uk/timetables.html as well as http://www.scot-rail.co.uk/page/HomePage for their accurate and precise timetable of Scotrail’s relivery process meaning that each train in the scenario is wearing the correct livery for the date of the scenario.

Length of the Scenario: 80 Minutes

Please note that all requirements listed above are required to run the scenario properly failure to have all the
requirements may result in a broken scenario.

The scenario will be available in the Network ScotEast section of scenarios under the name:
[CW] 14:48- Haymarket Depot- Eastfield Depot

Hope you enjoy the scenario!