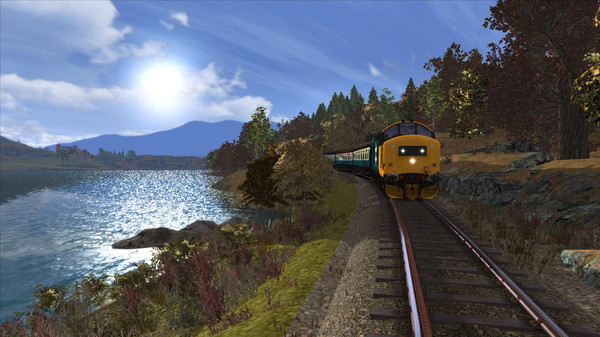 We sat down and spoke to scenario creator PooleCJ. We have to say he gave some brilliant answers and we look forward to seeing what else he produces in the coming months.

In the beginning, I started by occasionally making scenarios for the Steam Workshop. The scenario ideas mainly came from what I would like to drive in a scenario, usually something which wasn’t doable in Quick Drive and something not covered by scenarios released by anybody else. At this point, my early creations whilst not entirely unfeasible, they didn’t particularly represent realistic workings and the AI was to a completely fictional timetable. Soon I started working on scenarios based on real services with accurate AI, and on the whole, they seemed pretty popular on the Steam Workshop. This motivated me to create more realistic scenarios with the intention of providing a creation for others to enjoy and not necessarily for my own benefit. As I began to invest in more 3rd party addons (which can’t be used in Workshop scenarios), I posted a few of my creations on UK Train Sim too. At the end of 2018/beginning of 2019, I looked into the idea of hosting my scenarios on my own website although a lack of experience around creating a website meant this didn’t get very far. Soon afterwards, ATS was born and that’s the point that I began creating and uploading scenarios far more regularly and things have just taken off from there!

2. Where did you get the idea of doing the announcements and ultra realistic feel to your scenarios from?

The first time I ever considered implementing announcements was actually in my early days of scenario creating when I liked to experiment with using .lua scripting. I was tempted at implementing announcements in a Class 170 from Glasgow Central to Lanark (very unrealistic!). However a complete lack of knowledge of services in/around Glasgow, plus having no access to any kind of recordings meant this idea didn’t go anywhere. It wasn’t until over a year or so ago that I developed quite an unhealthy obsession with the PIS on ScotRail trains (yep, I’m weird I know!), combined with the motivation to make more scenarios that I decided to try my best at implementing them. From memory my first stint at adding announcements was being able to scrape a couple of old recordings together for the Edinburgh to Glasgow route and by adding these in with the .lua knowledge I had. Soon enough, I found myself going out and recording more and more announcements as well as developing some scripting to allow the announcements to play as soon as the doors open and my use of announcements has continued to pick up pace from there! As things stand currently I think I’ve covered most Scottish routes with announcement enhanced scenarios, although pending further travel restriction easing I’m hoping to be able to spend a day over in Glasgow recording all sorts of different announcements and perhaps see what I can do in the way of a scenario pack for the awesome Suburban Glasgow route. As a scenario creator, adding announcements provides an extra challenge and the main motivation is I know that other people enjoy them! It also makes testing scenarios more interesting too!

3. Do you have a favorite route/rolling stock to use when creating scenarios?

Now, I’m one of those people who really struggles to have a favourite anything, so let me try and answer this the best I can. The West Highland Line Extension is definitely up there as it’s one of very few routes where I don’t inevitably have to pull all-nighters trying to resolve various AI and pathing issues! Scenarios are straight-forward enough to create and I never get bored of the scenery when testing them! Edinburgh to Glasgow and also the Fife Circle I quite enjoy making scenarios on as I don’t tend to get too many AI issues and ‘local knowledge’ means I don’t have to spend ridiculous amounts of time boring myself with research! Finally I do enjoy WCML Over Shap too as scenario making there is relatively straight-forward and it’s one of my favourite routes in the sim. Rolling stock wise, my two favourites have to be the AP 37 and AP 156. When using them as the player train, they are both immersive to drive and hard to get bored of if I end up having to test a scenario several times over. When using them for AI, the vast number of customisable options gives a lot of flexibility and variation. I do also like using ECML based HSTs and Class 91s too as it’s always fun adding the correct window labels!

4. What factors do you take into consideration when choosing a scenario location, era and stock to use?.

For me, all three of these factors really depend on each other. Location wise, it really depends on the service I’m trying to recreate although I do try and ensure that as much of the route can be practically driven as possible. Era wise, I am far more knowledgeable with modern day operations and so a lot of the time, that’s when my scenarios are based. If I do make scenarios set in the past though then I most commonly pick the 2004-5 era. That’s because many franchises changed hands back then so it is better for livery variety, and 2004-5 era liveries tend to be my favourites regardless of where in the UK the scenario is based. Whilst I do love nice claggy loco hauled trains, my knowledge of pre-2000 operations is very limited and I feel like I have far more to learn and resources to get my hands on before I attempt anything set more than 20 years ago. Finally stock wise, it’s just whatever to my knowledge ran on the chosen route in the chosen era!

5. What tools do you primarily use to create the scenarios?

For modern day scenarios, it’s a combination of Realtime Trains and various ‘Gen lists’ found on facebook. I also refer to the Network Rail Working Timetable too when needed. For scenarios set further in the past, I usually try to recreate images I see online for inspiration. Some are posts I’ve seen on Facebook, others are images posted/taken by friends and family. Although I do try and only choose photos with enough information eg headcode and times etc to recreate. That’s for the player train, to do the AI then I’ll refer to historic timetables where possible. There are also a couple of ‘Gen sites’ I can use and will also do a quick google search where necessary to get information on things like freight train formations and also what liveries to use. Going forward, I’d really like to get my hands on historic WTTs as they would help me enormously. One of the biggest issues I face making historic scenarios is freight and ECS moves when I can’t find suitable references elsewhere. I do like to make my scenarios realistic as possible so I don’t particularly like the thought of unknowingly omitting services etc.

6. If you could give one piece of advice to people wanting to start scenario creation, what would it be?

My top bit of advice would be to start small and build your skills up. Trying to be overly ambitious and inexperienced will inevitably result in the scenario editor throwing a hissy fit, and you trying your hardest not to punch your computer screen! Start with a relatively straight-forward A to B run with a few AI trains so you can grasp the basics of the scenario editor. Then you can slowly start adding more and more to scenarios as your skills and knowledge builds up. YouTube will also be your best friend for ‘How to’ videos so you can visually learn the process of making a scenario one step at a time.

7. In terms of going forward with TS202X, what would you change about the scenario editor? Or is it good as is? ( Besides the ongoing crash dumping )

For me it would absolutely 100% be some kind of fix to the way that TS paths and prioritizes trains. Whenever I try to add the AI in a large terminus station, it’s just impossible to do it realistically without the editor throwing up issue after issue. In addition to this, the 1mph ‘crawl’ bug needs sorting as that’s been another cause of many infuriating scenario creation sessions. Finally, and this is more applicable to the game itself rather than the editor, there needs to be some way to ensure that scenarios work exactly the same for the creator as they do for the downloader. Far too often with my scenarios on ATS, everything will work like a dream at my end however anyone downloading it and playing it encounters X issue, Y issue and Z issue. These are usually a pain to diagnose and fix for everyone, for good. Churning out several minor updates to fix such errors isn’t fun for anyone!.

I’ve only ever been on a few, and on each occasion I’ve been pretty much bashing them from an enthusiast’s perspective. Because of that, I’ve found them really fun to travel on! They also saved Britain’s railways back in the 1980s and I don’t see them every day so I personally really like them! However if I was commuting on them daily for 20+ years then I’m sure my opinion would be very different! Love them or hate them, I personally find it very upsetting seeing vehicles being destroyed in a scrapyard so I’m certainly sad to see them being withdrawn!