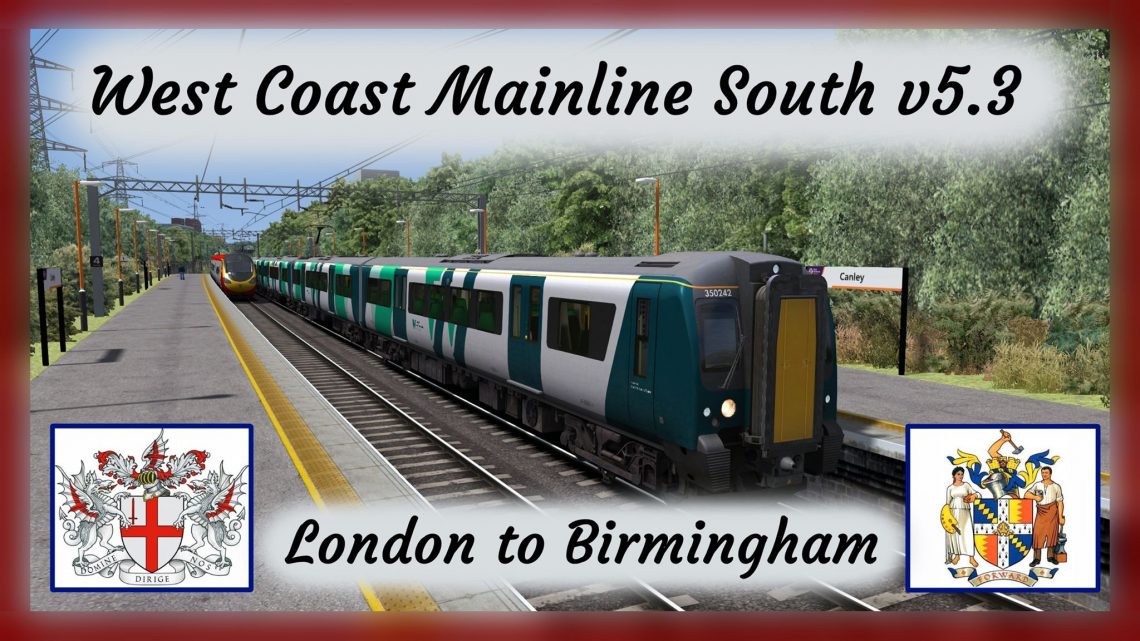 Included in this update.

Missing electrification has been added to sidings at Wolverton, Coventry and Kings Heath (Northampton).
Platform 10 at Watford Junction has been extended to accommodate a 12car Class 350.
Platforms at Birmingham New Street have been re-modelled.
Configuration corrections have been applied to a small number of signals.
New RTT and fictional scenarios added.
Dependency removed for GARL (Glasgow Airport Rail Link), IOW (Island Line), Hamburg-Hanover and the Virtual District Line.
The Virtual District Line 73refurb tube stock (as a substitute for Bakerloo line 72 stock) is now included in this update.
Route and scenario documentation has been updated and all download hyperlinks are working at the time of this publication.
General polish & tidy up.
Now zipped as a single download, which includes a patch for Armstrong Powerhouse Track Enhancement Pack owners.

IMPORTANT ! The previously available Update pack01 and Scenario Repack have both been incorporated into this update and MUST NOT be reinstalled.

The route covers London Euston to Birmingham New Street, including the Northampton Loop.
The DC lines from Euston to Watford Junction including the Bakerloo Line underground section from Queens Park to Elephant and Castle.

Steam: European Loco & Asset Pack. This is included with many routes, including the Woodhead Line (original)

ESSENTIAL FOR SCENARIOS (Must be installed prior to installation)
If you don’t have these installed, the included scenarios will fail to load correctly.
Steam: Class 390 EMU Add-On (original release)
DPSimulation: Class 390 ‘Virgin’ reskin by Horgy
JustTrains: Voyager Advanced 2019

These items must be present before installation to allow “No Driver/No passenger” patches to be applied.
(Many thanks to Leander Iversen for permission to include these patches)

(Updated download links can be found for all of these requirements in the enclosed documentation.)

Scenarios
A selection of scenarios written by Colin Izatt (including 3 new ones), plus a number of fictional scenarios.
Requirement for these can be found in the enclosed “Scenarios” folder as pdf documents.
A Free Roam scenario starting at London Euston with a selection of default electric and diesel traction, giving you the choice to explore the route in it’s entirety.
The route is also Quick Drive enabled with a broad selection of starting locations including the DC lines.

INSTALLATION INSTRUCTIONS:
Please read the README.pdf first before installing the route.
Run the WCMLSv5.3.exe and follow the instructions.
A patch is included for Armstrong Powerhouse Track Enhancement Pack owners (recommended).
More information is available in the documentation.

CREDITS
Many thanks to all who have contributed, helped and given advice during the making of this route.
Including:
Members of the The Virtual District Line team for permission to include their LU 73stock.
David Scott. Original version of the route.
Colin Izatt. Scenarios and extensive help with Beta testing.
Martin Masterson. Help and Beta testing.
Leander Iversen. Permission to include his No Driver patches for the Horgy 390 Virgin reskin & JT Voyager Advanced.
Jack Sherriff. Information and photos of the LNR & WMR corporate liveries.
Steve Green and Paul Jennings. Help and advice on signals and signage.
Gary Padley. Permission to include his assets.
Joseph Pearson. Permission to use one of his track assets.