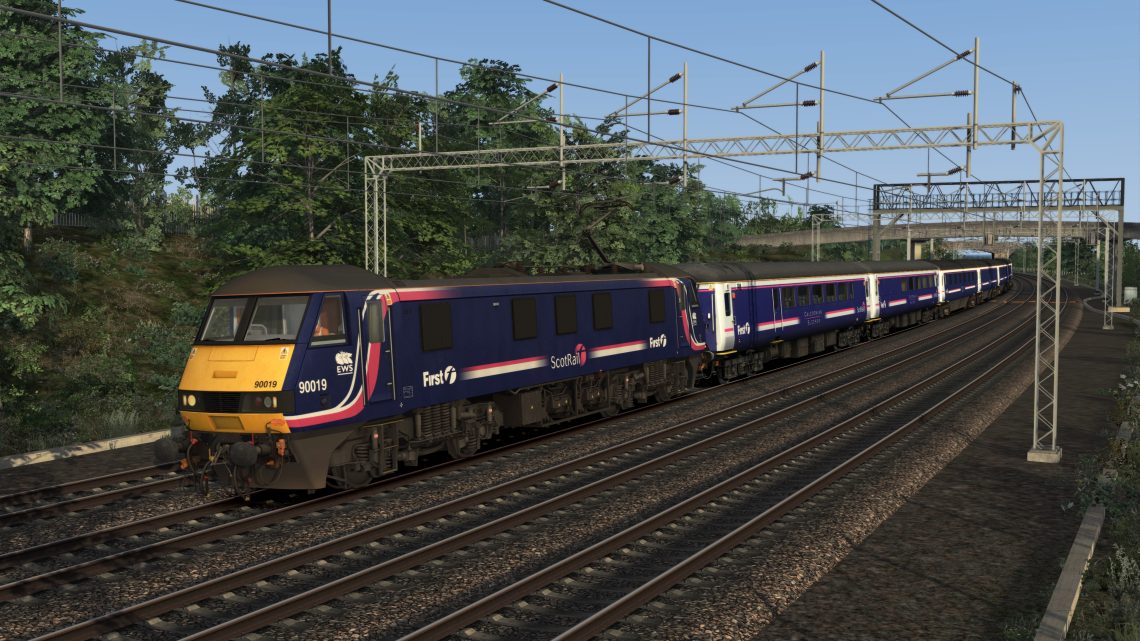 The Caledonian Sleeper… the Anglo-Scottish overnight hotel on wheels. Used to be run by whoever held the ScotRail franchise. If you cast your mind back to First ScotRail, you’ll remember they didn’t have any Class 90s. EWS did though, so what better way to run maroon locos on blue Barbie stock. Oh, there was a better way. Paint a trio of 90s blue, and slap on the Barbie swoosh vinyls. Badabing, badaboom.
Did the research, and was amazed to find how similar they all were. Only differences were 019 started off with a passenger beam (different shaped buffers at each end because reasons), and all of them had their front OHL flashes in a different place. By the end of their tenure, they looked pretty similar, which made it a heck of a lot easier for us.
Come to think of it, there’s 4 leccy hauled Cally services a night, so 3 locos were never going to cut it… what was the point in that? Not uncommon to see a red leccy or maroon leccy up at the front (even the Ex-Sybic 90 did it). I suppose for the Highland portions they didn’t have FSR 67s, would have been interesting to see, mind.

Credits
– Clowes – As always, all sorts of nice-looking stuff, the swooshy bits being at the top of the list. It probably looks easy, it wasn’t, sorry Clowes… Also did some scripting bits, manual bits, and testing. Probably something else as well that I’ve missed.
– Jake Fuller – Drawhook models