Forming part of the Fen Line this route depicts the picturesque lines between Cambridge and Peterborough in 2018, encompassing stations such as Cambridge North, Waterbeach, Ely, Manea, March and Whittlesea and freight yards at Ely, Ely Papworth and Whitemoor.

Get a discount on this product by purchasing a subscription.
Categories: Routes, Train Simulator

Forming part of the Fen Line this route depicts the picturesque lines between Cambridge and Peterborough in 2018, encompassing stations such as Cambridge North, Waterbeach, Ely, Manea, March and Whittlesea and freight yards at Ely, Ely Papworth and Whitemoor. The line sees a vast array of workings from Colas 37s test trains, LNER diverts alongside the bread and butter working of CrossCountry 170s and Greater Anglia DMUs. The lines around East Anglia are notably flat and thus this line has an abundance of different level crossings; from out of use examples at Ely, to modern Unipart Rail examples. We’re also extremely proud to bring you the debut of Cambridge station in Train Simulator with a fantastic model depicting the feel of this bustling commuter hub. The route shows the wonderful contrast along this line from the modern electrified commuter runs at Cambridge and Peterborough, the serene ‘old worldy’ feel of Manea and it’s semaphore signaling, to the bustling freight workings around March and Whitemoor.

Created by our very own Jake Fuller, included with this route is a plethora of modern level crossings and their associated parts. Ranging from AHBs (Automatic Half Barriers) and AOCLs (Automatic Open Crossing – Locally Monitored) to Full Barrier CCTV – MCB (Manually Controlled Barriers). Modern LED and the older Halogen Wig Wags are featured with a range of barrier types such as the more common “SPX” Variants as well as more modern styles, notably the Siemens “S60” (which is based on a more continental design). The pack also includes many Level Crossing related assets such as Road Signage, Cameras, Fences and Huts. 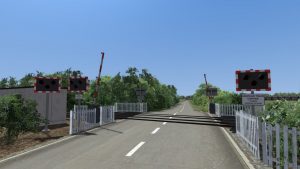 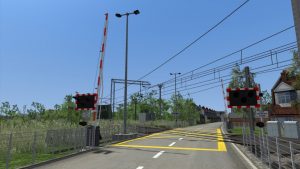 Alan Thomson Simulation
0 out of 5