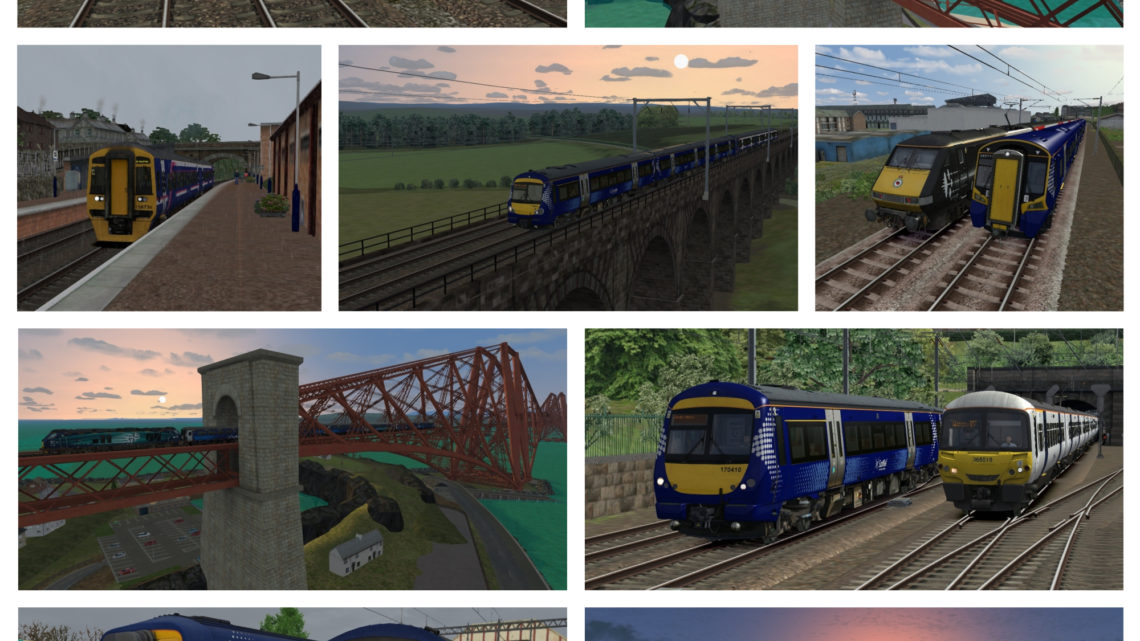 Due to the current situation in the world we all have a bit more time on our hands so to help fill everyone’s time I’ve decided to create a scenario pack for everyone to enjoy. Being based in Scotland the railways and rolling stock around Scotland is something I have the most knowledge about, so it makes sense to focus on that area,
hence why I have created my first scenario pack, Scottish Scenario Pack 1. I have got some more ideas for other packs in the future again focusing on the Scottish railways hence why I have titled this pack with a 1! With all my scenarios a read me will be provided, and as usual a little bit of background will be provided before going into the meat of the scenario as well as the requirements to run it.

The pack consists of 10 scenarios, with scenarios from 20 minutes to 90 minutes long there is a good deal of variety in this pack for you.

Now onto the Scenarios themselves, more information will be found in the read me’s of each Scenario, such as requirements and additional background information, but I thought I’d give you a little taster of what you can expect!

1) Scenario Title- 1B52- 0944- Inverness- Edinburgh
Train- Inter7City HST with ‘Classic’ Mk3s
Route- Fife Circle Line: Edinburgh- Dunfermline
Scenario Length- 50 Minutes
Background-
Today you will be driving the final leg of 1B52 the 0944 Scotrail service from Inverness to Edinburgh, unfortunately due to a late running freight train on the Highland Mainline, and with the Highland Mainline being single tracked in a few places we have lost time and are around 12 minutes behind schedule, this has meant that 2K26, the 1229 from Glenrothes to Edinburgh has got in front of us, so be wary of yellow and red signals as 2K26 will be calling at all stations along the way. On your way to Edinburgh you will be calling at Kirkcaldy, Inverkeithing, Edinburgh Gateway, Haymarket and Edinburgh Waverley.

2) Scenario Title- 1D63- 2313- Edinburgh- Motherwell
Train- Class 158
Route- Suburban Glasgow
Scenario Length- 80 Minutes
Background-
Today you will be driving 1D63 the 2313 service from Edinburgh to Motherwell, the only Scotrail DMU service per day that operates via Carstairs and to Motherwell.On departure out of Edinburgh at 2313 you will call at Haymarket, Slateford, Kingsknowe, Wester Hailes, Curriehill, Kirknewton, Carstairs, Carluke, Wishaw and Motherwell for 00:22. Once at Motherwell you will then form 5D63 the ECS move from Motherwell Platform 2
to Motherwell Platform 4, in preparation for the early morning commuter service to Edinburgh via Shotts.

3) Scenario Title- 1R22- 2000- Glasgow Queen Street- Edinburgh (2016)
Train- Class 170
Route- Edinburgh- Glasgow Electrified
Scenario Length- 55 Minutes
Background-
With Queen Street recently re-opened and sporting a new electrified look you will be operating the 20:00 Scotrail service to Edinburgh, you will be calling at Croy, Falkirk High, Linlithgow, Haymarket and Edinburgh Waverley. You have a pair of Class 170s on this lovely Friday evening across the Central Belt of Scotland with the sun beginning to set. The traffic is light with services beginning to slow down towards the end of service so there should be no problems.

5) Scenario Title- 1Y53- 0830- Fort William- Mallaig
Train- Class 156
Route- West Highland Line Extension
Scenario Length- 85 Minutes
Background-
Winter has arrived on the West Highland Line, today you will take 156499 on the first leg of its day’s work as you will operate the 0830 service from Fort William to Mallaig. After departure at Fort William you will call at Banavie, Corpach, Loch Eil Outward Bound, Locheilside, Glenfinnan, Lochailort, Beasdale, Arisaig, Morar and Mallaig. Thankfully the sun is out so scenery will be as good as it gets on this beautiful line.

6) Scenario Title- 2B91- 1653- Lanark- Glasgow Central
Train- Class 320
Route- WCML North
Scenario Length- 50 Minutes
Background-
Today you will drive the 1653 service from Lanark to Glasgow Central, you will call at Carluke, Wishaw, Shieldmuir, Motherwell, Bellshill, Uddingston, Cambuslang, and Glasgow Central. As it is the start of rush hour there is plenty of AI services about.

7) Scenario Title- 2K41- 1716- Edinburgh- Kirkcaldy
Train- Class 170/Class 158
Route- Fife Circle Line: Edinburgh- Dunfermline
Scenario Length- 50 Minutes
Background-
You are operating the 1716 service from Edinburgh Waverley to Kirkcaldy, calling at Haymarket, Edinburgh Gateway, Dalmeny, North Queensferry, Inverkeithing, Dalgety Bay, Aberdour, Burntisland, Kinghorn and Kirkcaldy. As it is peak time, extra carriages have been provided, today’s units are 170420 and 158740, operating as a 5 car service. Weather is good and there are no issues on the line tonight so it should be smooth sailing.

8) Scenario Title- 2W61- 1456- Glasgow Queen Street- Anniesland
Train- Class 158
Route- Suburban Glasgow
Scenario Length- 20 Minutes
Background-
Today you are operating one of the few services that have not been distrupted by the bad weather, the 1456 service to Anniesland, you will call at Ashfield, Possilpark & Parkhouse, Gilshochill, Summerston, Maryhill, Kelvindale, and Anniesland.

9) Scenario Title- 5K18- 0457- Mossend Down Yard- Cardenden
Train- Class 68
Route- Fife Circle Line: Edinburgh- Dunfermline
Scenario Length- 45 Minutes
Background-
Today you will be driving the Empty Coaching Stock service from Mossend Down Yard to Cardenden. You will pick up the service at the Dalmeny Curve before heading onto the Scottish East Coast Mainline over the Forth Bridge and up the Fife coast past Kirkcaldy and through Glenrothes before heading south to Cardenden. Traffic this morning is light with only a few early morning Scotrail services about, although please be advised you
will have to wait at Glenrothes for a stopping Scotrail service to depart.

I understand that there is a lot of requirements in here, don’t worry though not all the scenarios use everything, some need minimal requirements and others will need more, if you download the pack you will see what each scenario requires in its own Read Me.