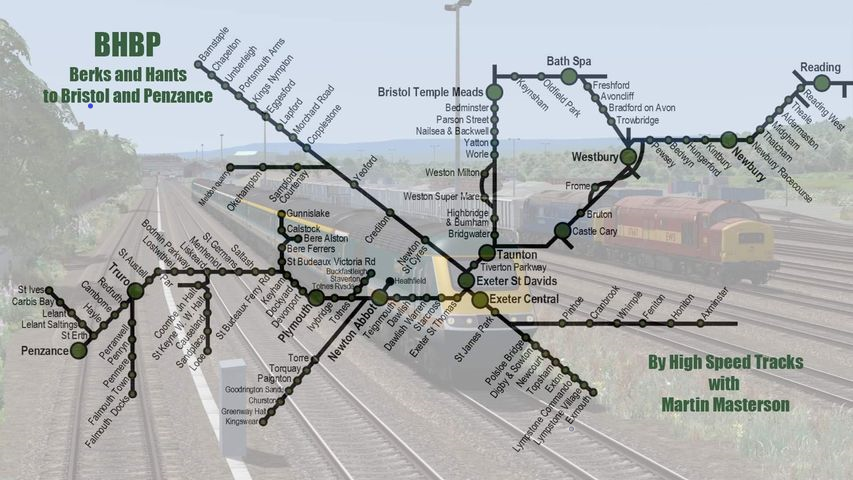 Berks and Hants to Bristol and Penzance

The combined new BHBP route has well over 300 miles of main, secondary and branch lines across southern and south west England:

RDC and SWER used assets from a significant number of different sources, so BHBP’s required assets list is quite long. There’s no way around this for now, but the combined route offers hundreds of miles of main, secondary and branch line track, allowing lengthy, varied and totally immersive true to life scenarios.
BHBP just won’t work at all without your having:

It may work – but only just in some cases – without your having the routes and assets shown below. BUT there will be big gaps in the scenery and you’d have a poor user experience.

We strongly recommend that you get hold of and install all of the above required routes and assets before you install BHBP.

The vast majority of problems reported in requests for support are caused by failure to have required assets installed.

PLEASE NOTE: BHBP uses a large number of assets available from UKTS. Where possible we have bundled them in to the route installation zip. UKTS developers and the UKTS community asset pack project require that the assets only be used in freeware routes (like BHBP) supplied free to users from the websites they’re made available from.

You are using these assets under licence from these developers. You can only distribute them (where allowed to do so) in accordance with their licence conditions, which are included in their asset directories inside the assets folder in the BHBP download zip. In short, privately using them on your own PC is fine. Only send them on to anyone else if the licence says you can and in the way the licence requires.