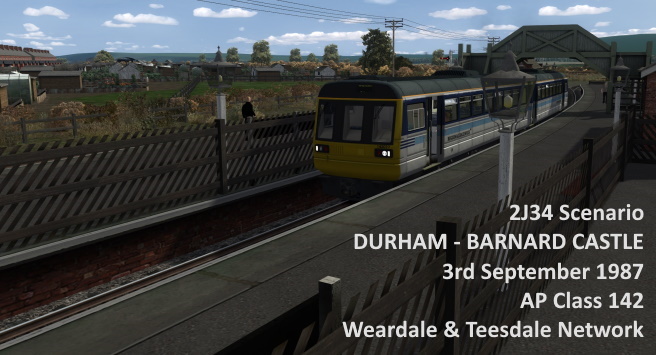 Welcome to this custom scenario for the Weardale & Teesdale route, featuring the AP Class 142 Pacer as player trains, and also featuring as AI alongside some Class 101s and the Class 25 with a freight consist.

The scenario is based in September 1987. As the original route itself is set earlier than this date, you won’t stop at 2 stations, which closed many years ago. This can be deemed as already closed, on your journey.

There is plenty of AI in the scenario, but as this is a quiet, rural line, this has not been over done. You will see trains leaving (and passing) at Durham before you leave, and will pass some AI trains too.

Don’t be too worried by the complex semaphore signalling in this route. I have not set the scenario up to be arcade-like and to deliberately catch you out. Generally your path will be clear, although you will encounter some yellows, and depending on your timekeeping, perhaps a red.

On the subject of timekeeping, this scenario is a ‘Standard’ type and has not been set up in with timed stops. The route map is HUGE is this route, with a dozen branches and offshoots and a lot of signalling and things were becoming too complex with a timed run, which was lessening the fun.

Note that the scenario begins at 11:00 but you are not due to depart until 11:04 so you have some time to set up your cab, board your passengers and prepare to depart.

Back on the subject of semaphore signalling on the route, do remember that a ‘dropped’ signal does not necessarily indicate a stop signal – look out for a few yellow signals, which feature a dropped semaphore (just like a stop signal) but that are coloured plain white, with a yellow light aspect.

NOTE: This scenario is for the AP (Armstrong Powerhouse) Class 142 and will not work with the DTG 142 or the RSC Rivera Line Class 143.

Extract the zip file and drag the included ‘Content’ folder into your main ‘Railworks’ directory, usually located at:-