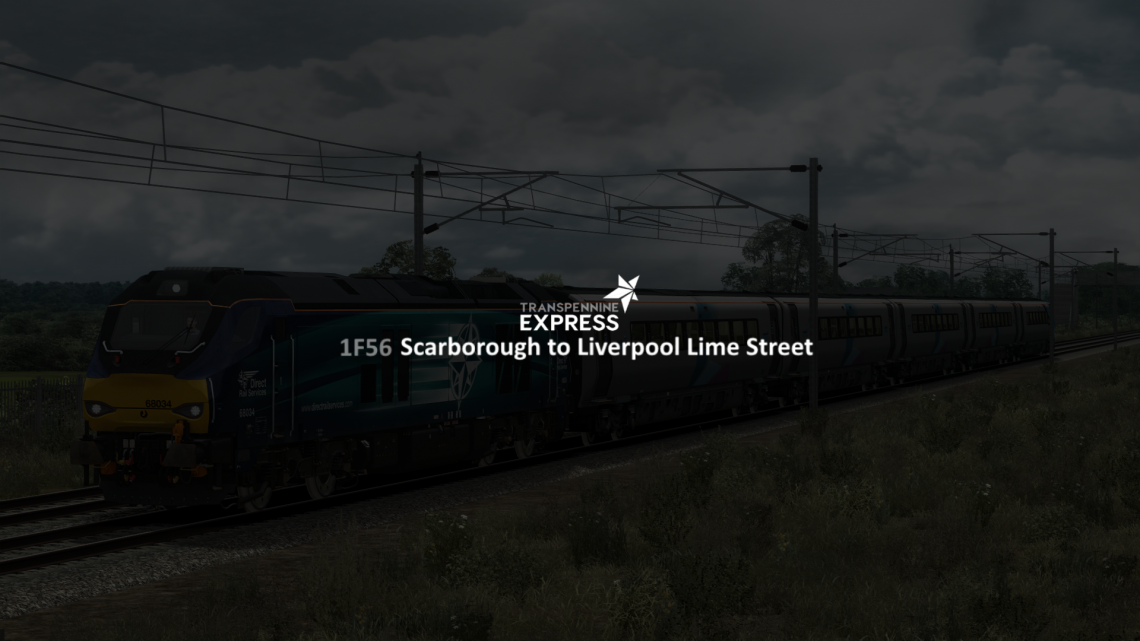 This scenario is a fictional scenario, which follows the Real Life Headcode of 1F56, but, in real life, in order to make this scenario more interesting, this scenario additionally calls at Garforth. In addition to this, AI is fictional to increase player immersion and to be able to achieve the highest player interaction.

Hello Driver!
Operate a Class 68 from York to Leeds on your turn of the Duty 1F56 from Scarborough to Liverpool Lime Street. Having just been relieved by the Driver that took it from Scarborough, you will be at the controls of 68034 to Leeds, where (due to you not being trained on the route from Leeds to Manchester Victoria) you will be relieved. Please set up your cab for a timely 12:03 departure towards Leeds, calling at Garforth and Leeds only. York ROC has a Speed Restriction in place between York and Colton Junction for the Up Leeds which means you may be held at some signals until Colton Junction. You are currently following a late running Redcar Central to Manchester Airport Class 185. Enjoy the run driver, and Look out for those signals!

Name of Scenario: 1F56 Scarborough to Liverpool Lime Street
Route: Leeds Lines
Stock: AP Class 68
Route Covered: York to Leeds
Description: Operate a Class 68 with 5 MK5 coaches and a MK5A from York to Leeds calling at Garforth and Leeds, where another driver will take over you're duty to Liverpool.
Briefing: Hello Driver, operate this Class 68 (68034) from York to Leeds on Scarborough to Liverpool Lime Street, calling at Garforth and Leeds only. There are no known faults with this unit.
Starting Point: York
Creator: Peter.Morris
Year: 2019
Weather: Cloudy
Length: 45

SCENARIO REQUIREMENTS these are also situated in the Read Me which can be found at the very bottom.

I create Scenarios for the UK If you have any suggestions you can Contact me at [email protected] https://www.paypal.me/petermorris07