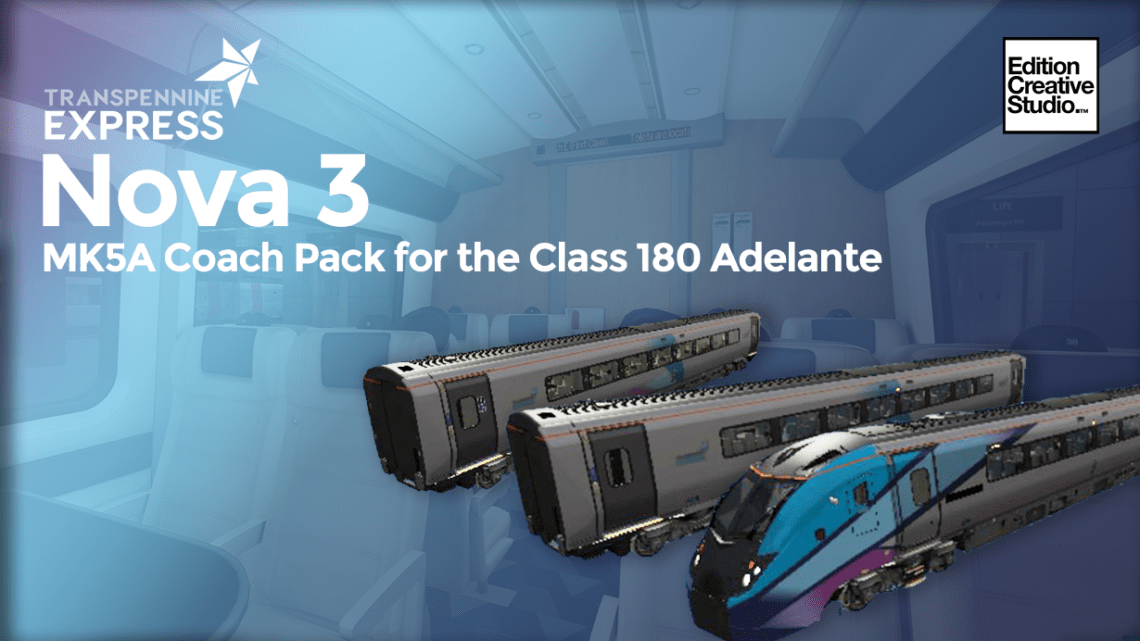 It was first announced by TransPennine Express in 2016 that they were to procure 126 new vehicles from CAF, which included 66 Mark 5a locomotive-hauled coaches. They would be formed into 13 five-carriage sets, hauled by Class 68 locomotives. This equates to 65 coaches for total service, with the 66th coach being a spare Driving Trailer. TransPennine Express have branded their new Class 68 + Mark 5a combination with the name Nova 3.

This pack relies on DTG’s Class 180 to create a coach and DT that look comparable to the real Mk5a Coaches. The Mk5a share many design cues with the Class 180 ‘Adelante’; such as Plug doors with Bonded glazing windows, the bodyshape, the windows and the shape of the front end. Whilst nowhere near identical, the Class 180 Adelante offers a close experience of the Mk5a coaches in Train Simulator and yet out of all rolling stock available for the game, it remains the most resembling.

Features include:
– High Definition Livery inspired by all variants of the TPE Livery combined
– First Class interior based upon the interior fitting of a Class 185 Combined with a Class 802.
– Easy Installer and file verification tool
– Custom Made elements such as Faux Leather seat textures & TransPennine Geometric Pattern Carpet
– Coupling Optimized to work with AP’s Class 68
– Many Others!

f) Launch TS2020 And Look for ‘Nova 3’ in quick drive! I recommend using this pack with the Class 68 on the following routes:

Or Even Up the ECML from York to Edinburgh via Newcastle.

-A Note from The Creator: –
I sadly do not have the knowledge or capacity to 3D model new coaches for the game, therefore this pack reskins a lot of the Adelante to follow suit with TransPennine’s Mk5a Coaches.

I hope you’re able to use these coaches whilst respecting my artistic license (Refers to a creator’s freedom to ignore the conventions or rules that normally govern the art in which he or she works). I’ve had to make compromises whilst making this pack; DTG has made a poorly UV Mapped model, therefore meaning the side livery on the coaches cannot stretch across the whole coach. Real features such as additional First Group logos, LED Destination screens and LED Coach Number Screens and a more realistic DVT are just not achievable with simply reskinning and adapting code, and I therefore hope you can understand these limitations, and use your creative imagination to simply ‘pretend’ this is the real thing. I’ve put as much effort in as possible to try and get this as close as possible, so please enjoy.

If you don’t like this pack because ‘its not the real thing’ or ‘it doesn’t look right’, then please don’t leave poor reviews. This product is not for you in that case, you should investigate acquiring expensive 3D models of the Mk5As and coding them into the game yourself. Keep checking back however, as I will update the pack with more features.