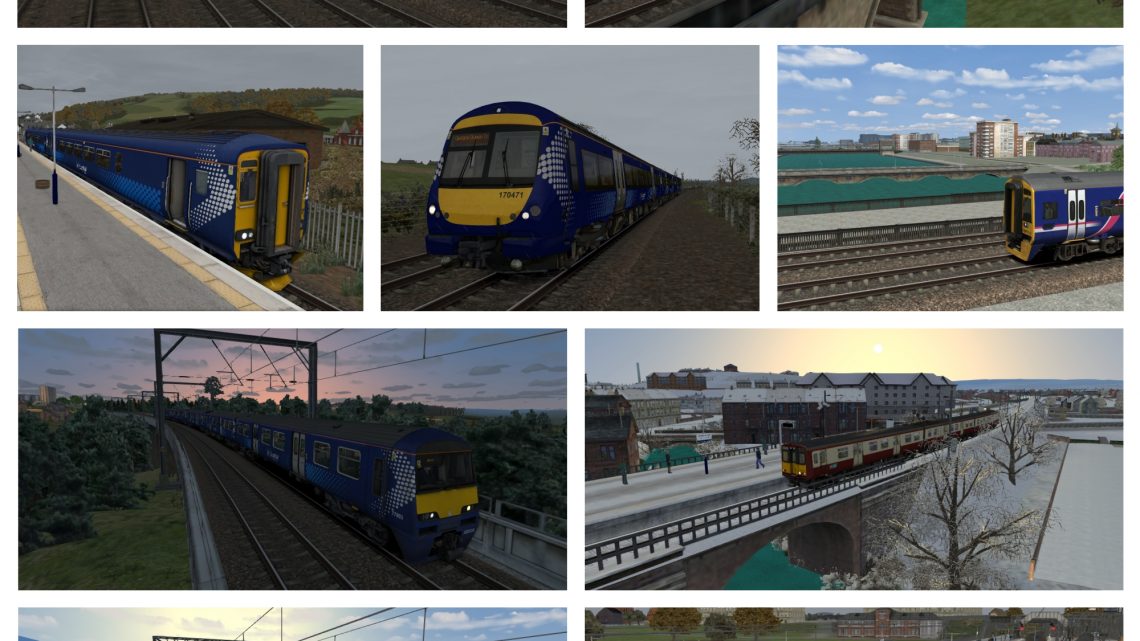 Due to the current situation in the world I have a bit more time on my hands, I have decided to help fill everyone else’s time by creating my second Scottish scenario pack, this time focusing solely on the fantastic Suburban Glasgow. Being based in Scotland the railway and rolling stock around Glasgow is something I am knowledgeable about, so all rolling stock should be accurate to the time of the scenarios. All the scenarios are based on modern stock based mainly in 2019 although there are a couple of 2015 based scenarios which can be distinguished through a (2015) at the end of the title. The 2019 scenarios have been made using the real world timetable alongside Realtime Trains and the 2015 scenarios have also been done to timetable thanks to DP Simulations’ backlogged timetables (https://www.dpsimulation.org.uk/scotrail-timetables.html). As with all my scenarios a read me will be provided for each one within the pack, it will include a little bit of background/history on the route/service/train before going into the meat of the scenario as well as the requirements to run it.

This pack consists of 11 brand new scenarios as well as an enhanced version of a previously created scenario, there is a mixture of scenario lengths from 30 minutes to 75 minutes, so there is a good deal of variety for you to choose from. I have tried to include as many services in the Glasgow area using as much track as I could.

Now onto the scenarios themselves, more information will be found in the read me for each scenario, such as requirements and additional background information, but I thought I’d give you a little taster to see if any scenarios take your fancy!

1) Scenario Title: 1C04- 1700- Anderston- Carstairs
Train: Class 320
Scenario Length: 65 Minutes
Background:
Today you will be operating one of the two peak time services from Anderston to Carstairs, you will be starting at Yoker Depot where you will operate the ECS move from Yoker Depot to Anderston before forming 1C04 to Carstairs calling at Glasgow Central Low Level, Argyle Street, Rutherglen, Bellshill, Holytown, Wishaw, Carluke and finally Carstairs. As it is the beginning of the evening peak traffic is beginning to build up as you take the commuters home!

2) Scenario Title: 2A37- 1356- Barrhead- Glasgow Central
Train: Class 156
Scenario Length: 25 Minutes
Background:
Today you will be operating a stopping service from Barrhead to Glasgow Central. It is a dull day in Glasgow but everything is running fine on the rails, so there should be no problems on your run into Glasgow Central. On your way to Central you will be calling at Nitshill, Priesthill & Darnley, Kennishead, Pollokshaws West, Crossmyloof and Glasgow Central.

3) Scenario Title: 2E56- 1907- Balloch- Airdrie
Train: Class 318
Scenario Length: 75 Minutes
Background:
Today you are operating one of the longer suburban services on the North Clyde Line, you are taking a pair of Class 318s from Balloch to Airdrie, with a total of 25 stops this service will certainly test your braking ability! Starting on the banks of Loch Lomond you will be calling at Alexandria, Renton, Dalreoch, Dumbarton Central, Dumbarton East, Dalmuir, Singer, Drumry, Drumchapel, Westerton, Anniesland, Hyndland, Partick, Charing Cross, Glasgow Queen Street Low Level, High Street, Bellgrove, Carntyne, Shettleston, Garrhowhill, Easterhouse, Blairhill, Coatbridge Sunnyside, Coatdyke and Airdrie. The sun is beginning to set over Glasgow so it will be a nice drive though the city!

4) Scenario Title: 2F01- 0546- Motherwell- Dalmuir
Train: Class 320
Scenario Length: 60 Minutes
Background:
The sun is rising over Suburban Glasgow on a fine spring day and the early morning movements around Glasgow are beginning, in preparation for the morning peak. Today you will operate the first service of the day out of Motherwell, the 0546 service to Dalmuir. You will call at Airbles, Hamilton Central, Hamilton West, Blantyre, Newton, Cambuslang, Rutherglen, Dalmarnock, Bridgeton, Argyle Street, Glasgow Central Low Level, Anderston, Exhibiton Centre, Partick, Hyndland, Jordanhill, Scotstounhill, Garscadden, Yoker, Clydebank and Dalmuir. There’s a lot of ECS moves going about this morning as well as some early morning services like yourselves.

6) Scenario Title: 2L01- 1803- Larkhall- Milngavie
Train: Class 320
Scenario Length: 60 Minutes
Background:
With evening peak just about over you have been tasked to operate a service from Larkhall to Milngavie, this service will be considerably quieter than the inbound service as the commuters will have dispersed by the time you reach Glasgow Central! Unfortunately the weather has taken its toll on the services today with a lot of weather related delays across the North Clyde and Argyle Lines, so do your best to keep to time. You will be calling at Merryton, Chatelherault, Hamilton Central, Hamilton West, Blantyre, Newton, Cambuslang, Rutherglen,
Argyle Street, Glasgow Central Low Level, Anderston, Exhibition Centre, Partick, Hyndland, Anniesland, Westerton, Bearsden, Hillfoot and Milngavie.

7) Scenario Title: 2M79- 0831- Newton- Glasgow Central
Train: Class 314
Scenario Length: 35 Minutes
Background:
With snow having fallen overnight in Glasgow and the winter sun rising, it is a beautiful but chilly morning in suburbs of Glasgow, today you will be operating 2M79 the 0831 service from Newton to Glasgow Central, you will be calling at Kirkhill, Burnside, Croftfoot, Kings Park, Langside, Pollokshaws East, Shawlands, Maxwell Park, Pollokshields West, and Glasgow Central. Watch out for wheelslip on the icy track!

8) Scenario Title: 2N02- 1205- Glasgow Central- Neilston
Train: Class 380
Scenario Length: 30 Minutes
Background:
With the withdrawals of the Class 314 units fast approaching, the replacements in the form of Class 318, 320, 385 and what you are driving today, the Class 380 began appearing on some of the Cathcart Circle, Newton and Neilston diagrams, giving the suburbs of Glasgow trains with sockets, toilets and air conditioning, modernising the short routes in and around Glasgow. Today you will be driving 2N02 the 1205 service from Glasgow Central to Neilston. You will be calling at Pollokshields East, Queens Park, Crosshill, Mount Florida, Cathcart, Muirend, Williamwood, Whitecraigs, Patterton and Neilston, where you will then form the ECS move to Neilston Shunt.

9) Scenario Title: 2N54- 0942- Alloa- Glasgow Queen Street (2015)
Train: Class 170
Scenario Length: 40 Minutes
Background:
Back in 2015 when the Class 385 was just merely a design in the works the services around Central Scotland were operated by DMUs. Class 170s on the Edinburgh to Glasgow line as well as suburban services to Dunblane, Alloa and Stirling also being covered. Today you are operating 2N54, the 0942 Scotrail service
from Alloa to Glasgow Queen Street, however you will be starting at the now sceneried Stirling. Today you have a Class 170 on the service but the weather isn’t being nice to you with it bucketing down so do watch out for wheelslip. You will be calling at Stirling, Larbert, Croy, Lenzie, Bishopbriggs, and finally Glasgow Queen
Street.

10) Scenario Title: 2V35- 0654- Springburn- Dumbarton Central
Train: Class 318
Scenario Length: 50 Minutes
Background:
Today you are operating a pre-morning peak service from Springburn to Dumbarton Central. You have been given a single Class 318 for today’s journey, which will cope fine on this service but the return to Springburn afterwards will be busy! You will be calling at Barnhill, Alexandra Parade, Duke Street, Bellgrove, High Street, Glasgow Queen Street Low Level, Charing Cross, Partick, Hyndland, Jordanhill, Scotstounhill, Garscadden, Yoker, Clydebank, Dalmuir, Kilpatrick, Bowling, Dumbarton East and Dumbarton Central. It is a nice morning with a light mist over Glasgow but all is fine on the rails!

11) Scenario Title: 5T06- 1418- Yoker Depot- Glasgow Works
Train: Class 314
Scenario Length: 40 Minutes
Background:
This scenario was one that I created in early 2019 when this move took place however back then there was inaccurate stock so I have decided to recreate it for this pack with better stock. You will be starting the scenario at Yoker Depot where you will need to set up the train, check the points are set before heading along the North Clyde Line passing Jordanhill, Partick, Charing Cross, Glasgow Queen Street Low Level, the former stomping grounds of the 314s, you will then head up the Springburn branch where upon arrival into Springburn you will shut the train down for the final time and prepare for the Class 37 to haul it the short distance to Glasgow Works for scrapping.

12) Scenario Title: 5W60- 0937- Glasgow Queen Street- Corkerhill C.S.M.D. (2015)
Train: Class 158
Scenario Length: 45 Minutes
Background:
Today you will be operating a service from Glasgow Queen Street to Corkerhill C.S.M.D. You will depart Glasgow Queen Street in your Class 158 when you get a clear signal, you are running late due to your train arriving in late from its last service but you will make that up at Eastfield Depot where you will await a path before change ends and heading via Springburn and onto the City Union Line, where the former St Enoch’s station once stood, until you reach Shields Junction. Whilst on the City Union Line you will go over the lines looking into Glasgow Central, as well as the site of the old St Enoch’s station. As it is set in 2015 you will be seeing a lot of different services, traction and liveries on your journey to Corkerhill!

If there are any scenarios that seem absent from the Glasgow area, such as Lanark and Anniesland services you might be able to find them in the first Scottish Scenario Pack found here: (https://alanthomsonsim.com/?download=scottish-scenario-pack-1)

However, if you do want to run all of the scenarios with no problems you will need the following:

One last thing, I hope you enjoy all of the scenarios that I have created, please feel free to give me any feedback necessary.