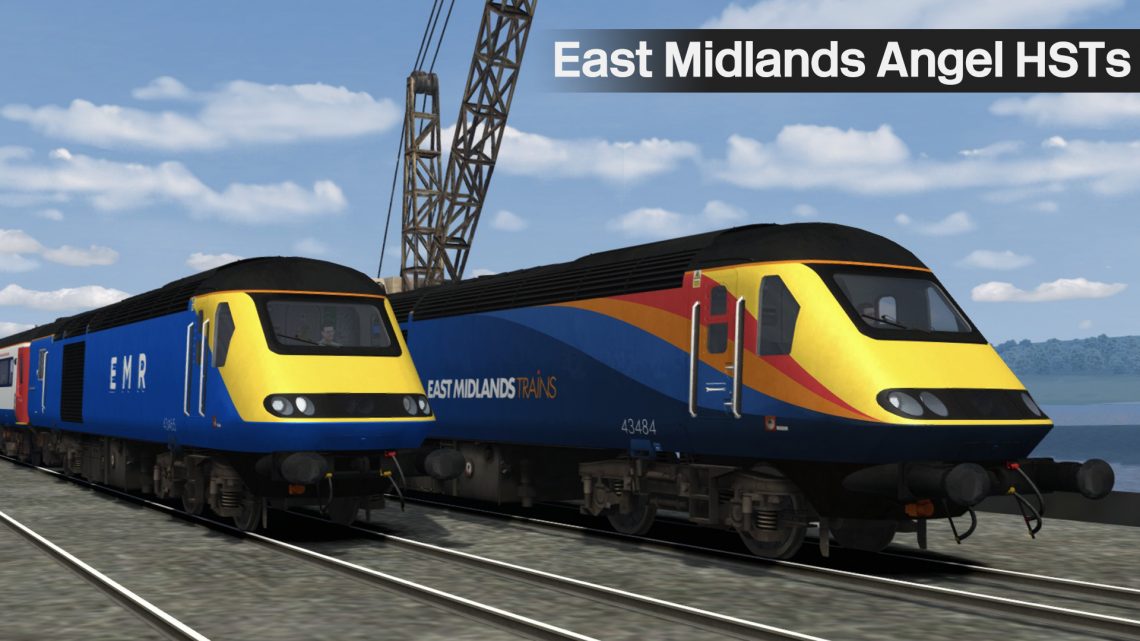 In 1987, 8 Eastern Region Class 43s were fitted with buffers in order to couple to 91s, which were in testing prior to the completion of the Mk4 sets. After the 91s had finished with the HST sets, the 8 43s remianed with buffers intact. Throughout their history they have worked for a number of operators – firstly GNER. 2 of these 43s went to Network Rail, and the remaining 6 locos to the newly founded Grand Central. In late 2017, the HST lease Grand Central had ended, and due to major disruption cause by the Thameslink programme, EMT took these 6 units on. Now resplendent in a revised East Midlands Trains livery, they work 2 diagrams during weekdays only.

These are known as the ‘Angel sets’. This is due to the leasing company (Angel Trains) only owning these 3 sets out of all of the East Mids sets (the remainder are owned by Porterbrook).

This pack features 43 423 (with Valenta & 40 Years plates), 465, 467 (with Nottingham Police & Fire Rescue plates, and polished buffers with buffer grease), 468, 480 and 484 – all with dynamic script that applies the correct features to each number. A reskin of the Mk3 TF, TRFB and TS are included with correct numbering in order to form sets DY21, 22 and 23.
As of late June 2020, set DY22 is stored and the remaining sets have no booked work (are still allocated to their regular diagrams however).

Please note: For a reason I can’t figure out, within the scenario editor the Driver version of the Class 43 only highlights and selects when you attempt to do it through the buffers, or where the nameplate sits. Apologies.

Changelog:
01/11/2019
Now compatible with James Ivell’s brilliant HST additions. New horn grille, modified cab door windows, extra functionality with automatically applying tail lights when light engine, and a new TRFB decal! It is likely that for existing scenarios, the new TRFB will have to be swapped in.
28/06/2020
Added unbranded and EMR branded Power Cars. Numbering has been edited and should now work flawlessly.
29/06/2020
Added Mk3 branding and tidied up in game names.
This update will eventually be superseded. Within the next version full numbering (including jaw numbers) and revised nameplates (including 480’s) will be available. The dev working on these is extremely busy and so I cannot estimate when this update will be released.
06/07/2020
Added folder missing from zip (sometimes zips ignore empty folders) so batch file will copy Mk3 textures.
10/07/2020
Amended a file so bogie textures should now copy over (bug created by previous update).
21/12/2020
Added missing line in batch file – unvinyled EMR variant will now show.

Credits
Nameplates and scripting were done by James Ivell, many thanks for his assistance in the project.
Thank you to Matthew Wilson (VP) for permission to utilise the EMT and EMR Mk3 logos created for the Porterbrook sets.