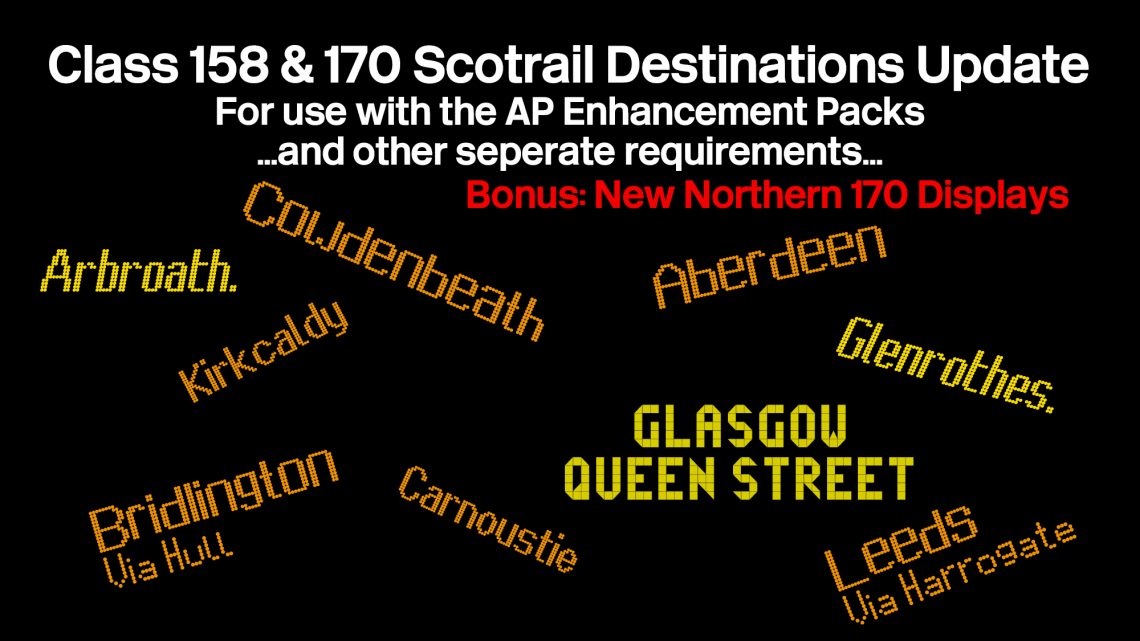 This significant update was brought about for a number of reasons;

My recent destinations patches for both the Class 158 and Class 170 were on reflection, not up to standard and particularly for the 158, just plain and utter wrong.
Also, of late, in passenger service in the real world, Class 158 and 170 pairings are becoming a lot more common place, and both my recent patches had different key assignments per rolling stock type, which caused difficulty in-game when changing the screens, and they would show different destinations at each end. Therefore I have re-assigned destination codes for both types and they are now a 100% match.

I understand that this may be of annoyance to scenario creators who have already released scenarios using my recent patches and/or the default destinations that came with both packs, but this was the only way in which the aforementioned issues could have been resolved.

The Scotrail 170 has at least 3 different font types in use on their trains, 2 of which (the more widely used) are accommodated in this patch.
Using photographic references and my own visual observations, one type is used on units 170401-170420, and the other type on 170393-170396 and upwards from 170425, so that is how they have been entered via the various modified .bin files within this download.
A small number of their 170’s have scrolling screens, but this is a very small amount, and the unavailability of scrolling screens in the TS 170 made this impossible to replicate.
I have kept the same trend of assignments by numbering throught all variants, these being SPT Rail, Scotrail, First Scotrail, ex-First Scotrail, unbranded Blue, and Saltire liveries.

Please note, the DEFAULT AP Saltire livery, and DEFAULT AP ex-FSR liveries are NOT altered in this patch, as these are both contained in the Ash Clark Reskin Pack which is listed in the requirements below.

I have also included brand new Northern destinations, which apply to the Unbranded Saltire variations in the reskin pack, aswell as the Northern reskin by Major Wales, also listed in the requirements below.

As an extra addition I have also fixed the numbering on the Borders livery reskin, which you must have installed beforehand. – The BTP livery numbering fix has been removed due to a new reskin available. (06/05/2021).

These have been a right royal pain in the bum! The reason being, the font that SR use on the 158 is LARGE, and it SCROLLS! – Obviously, the TS 158 doesn’t have scrolling destinations, and due to the font being as large as it is, it is impossible to replicate in TS without a scrolling screen.
So, I have had to use an ALMOST identical font, at a smaller size, in order to achieve the second best finished product.

I also completely remade the older style segmented displays, which were in use on the Scotrail livery from the early 2000s etc, and then on a handful of Saltire units as recently as late 2017/early 2018, and of which, these units have since transferred down to Northern. These units can be found in the scenario editor with the prefix ‘(Vul)’.

As ever, ‘np’ passengerless variants of all are included for those depots, sidings and E.C.S trains.
———————————————-
In this update:
Higher resolution 170 destinations, including the small font type where applicable.
Support to fix the numbering on the Caledonian Railworks ‘BTP’ and ‘Borders’ livery.
Updated .bin files in line with recent updated AP EP packs.
———————————————-
REQUIREMENTS:

** IT IS 100% VITAL TO HAVE ALL REQUREMENTS INSTALLED BEFORE INSTALLING THIS PATCH **
Failure to do so will just mess this patch up! You have been warned!

Although my content is freeware, thousands of hours have gone into the content that I produce, and your kind donations really give me that extra push to continue to produce even more content. It is entirely up to yourself if you wish to do so, but it will be much appreciated should you decide you would like to! – Or you could just buy me a beer!