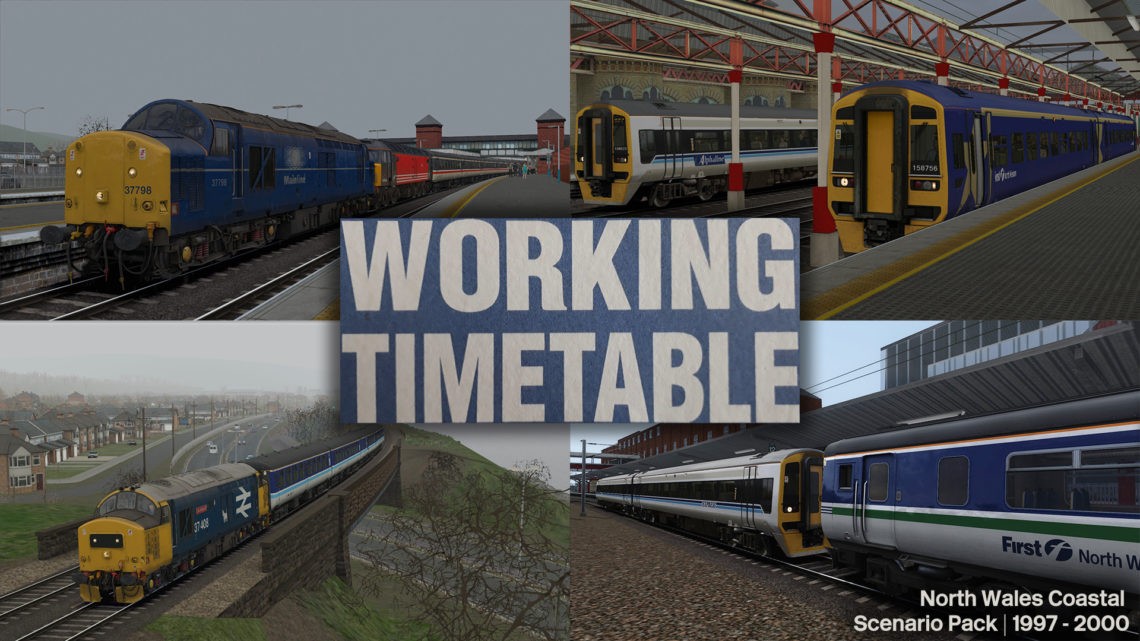 Buy together and save – get both for £10.00 – Use code WTTCOMBO at checkout

This pack has been researched using archive Working Timetables, rolling stock allocation and livery records, photographic records, and other source materials. What you see is hopefully a realistic representation of the varied workings and rolling stock to be seen on the North Wales coast line during the period between 1997 and 2000, the early days of privatisation.

In order to do this, many add-on products are utilised. There are nine scenarios, giving over fifteen hours of driving time. Key features include :

* A mixture of fast and stopping services

* Rescue of a failed train in one scenarios, plus a unit defect in    another

* Infrastructue issues such as single-line working and signal failure

Two days before the longest day of the year, you are in charge of this early Saturday morning departure from Holyhead to London. Your HST set worked the 2125 Fridays-only service from Euston last night. You will drive this return train as far as Crewe, calling only at Bangor, and Chester. There is single-line working in place between Mostyn and Holywell Junction.

On a fine Friday morning, you are working an early service along the coast with First North Western’s 158756. You have been on this unit since 03.20 this morning, having relieved the 01.50 Holyhead – Birmingham at Chester. Now on the return 05.15 from Birmingham, you will work through to Llandudno Jn where you will be relieved for a much-needed coffee.

On a Summer Friday morning work an empty stock from Chester to Crewe, which then attaches to a Birmingham to Holyhead limited stop service that provides a boat connection to Ireland. You have just relieved an empty stock working, 5D67 09+11 from Salford Crescent, at Chester. You will take this unit empty to Crewe and attach to a Birmingham to Holyhead service. You will then drive that service forward from Crewe. This unit formed the 07.18 from Chester to Salford Crescent via Altrincham earlier this morning.

On a wet Wednesday afternoon you are have arrived at Penmaenmawr with a ballast train. Normally you sit here whilst your train is loaded, however today Control have a little job for you

On a weekday at the start of the Winter timetable, work a class 37-hauled Holyhead to Birmingham service betewen Llandudno Jn and Crewe. You are being held a couple of minutes to connect out of the branch train from Llandudno which is a few minutes late. Once it has arrived you will proceed to Crewe, calling at Colwyn Bay, Rhyl, and Chester only.

You are working the 13.05 to Crewe on a scorching hot Sunday. You are booked to call at all stations to Crewe. The coast is busy today and station stops may take longer than normal. One engine on 158754 on the rear has been suffering in the heat, has shut down several times, and you have now isolated it. The windows will be opened by the guard to provide some ventilation.

37408 is the last 37/4 to retain large logo livery and is a bit of a local celebrity here on the coast. Last night it was one of the locos on the double-headed Sunday evening boat train to Birmingham, and it arrived back in Holyhead around 02.30 this morning. It’s just been released off the depot but doesn’t need to be prepared. Run it down to the station to collect your coaches and guard, run empty to Bangor, then run as a passenger service to Crewe. This train is popular with shoppers and therefore has several stops.

101656 has just arrived in Chester from Manchester via the ‘Cheshire Lines’ route via Altrincham, and normally stables until returning over that route in the morning. However your service, 1D45 1711 Manchester – Llandudno, is stuck at Eccles due to an incident. In order to keep things moving, Control have instructed you to re-start the service as 1T45, giving a rare opportunity for one of Longsight’s power-trailer class 101s to head down the coast. You were due to leave at 1822 but the 101 wasn’t due here until 1825. Do your best with only 50% of the power normally available on class 101s on this route.

On showery Saturday in December, work an afternoon all-stations service across Anglesey and on to Llandudno, returning as far as Llandudno Junction. This service is booked to call at all stations, however some of these are request stops. The guard will keep you updated on what stops are required.

** – The scenarios will function without the Sky and Weather EP, however the intended weather will not appear.