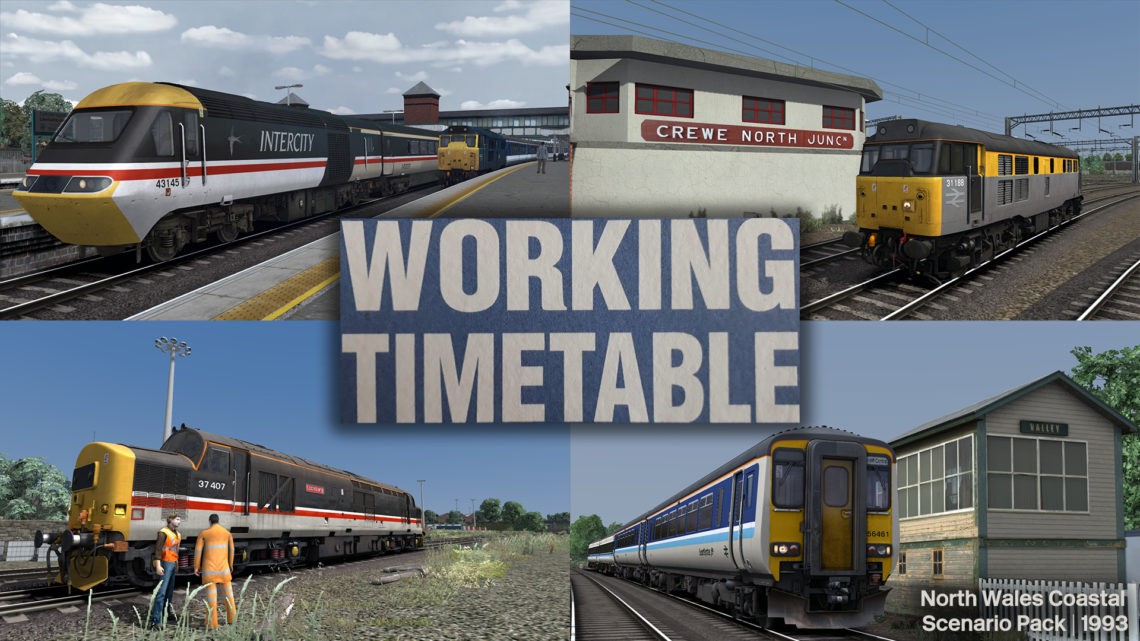 Buy together and save – get both for £10.00 – Use code WTTCOMBO at checkout

This pack has been researched using archive Working Timetables, rolling stock allocation and livery records, photographic records, and other source materials. What you see is hopefully a realistic representation of the varied workings and rolling stock to be seen on the North Wales coast line during Summer 1993.

In order to do this, many add-on products are utilised. There are eight scenarios, giving over fifteen hours of driving time. Key features include :

* A mixture of fast and stopping services

* Operational requirements such as locomotive run-rounds and     locomotive changes

Problems on the Southport line this morning meant that the class 37-haluled rake of coaches didn’t reach Manchester in order to form this boat train to Holyhead. The only stock available was a pair of class 142 units, which you will now be working forward from Chester.

On a misty September morning drive a limited stop service down the Coast to Llandudno, then return to Llandudno Jn with a stopping service bound for Holyhead.

Maintenace requirements on the booked class 37/4 means that Crewe depot have had to allocate Civil Engineers’ 31188 on this Fridays-only limited stop additional working to the seaside.

A shortage of HST sets on this high Summer Saturday means that Old Oak Common have had to send a Thames Valley commuter set of mark 1 and 2 coaches out to cover this working to and from Holyhead. Re-engine the service at Crewe and head for Holyhead doing your best to minimise the delay. Now repainted out of its celebrity GWR livery and shorn of her ‘Great Western’ nameplates, 47500 is now just another RES loco.

On a stormy July Friday, take a daytime Intercity service down the coast. On

Saturdays this service runs through to Holyhead, but on weekdays there is a Regional Railways loco-hauled service which follows you from Llandudno Junction, then connects at Bangor for Holyhead. At this time, HSTs for the Holyhead services were supplied from the Western Region pool and ran empty from Old Oak Common to Euston and vice-versa.

It’s a Summer Saturday and 37407 has arrived in Holyhead with a fault. Unable to be repaired at Holyhead, you will need to isolate two of the six traction motors. You will be driving its return working as far as Crewe with reduced power.

One train a day links north and south Wales, operated by one of Cardiff Canton’s class 158s and on weekdays running via Crewe. On Sundays, the southbound train runs combined with a Newton Heath-based Sprinter. The two divide at Chester; the Cardiff train reversing and running via Wrexham, and the leading unit forming a link to Crewe. You will be driving as far as Crewe with the front portion. It wouldn’t be Sunday without engineering works, and single line working is in force between Penmaenmawr and Llandudno Jn.

On a fine June afternoon drive an out-and-back local service from Holyhead to Llandudno Juntion and return, with 101688 which has recently transferred to Newton Heath from Scotland and still carries Strathclyde PTE livery. These trains call at all stations, but some are by request only. The guard will keep you updated on the stops required. If there are no passengers to alight at a station, you must reduce speed to be able to stop if required by passengers on the platform.

** – The scenarios will function without the Sky and Weather EP, however the intended weather will not appear.