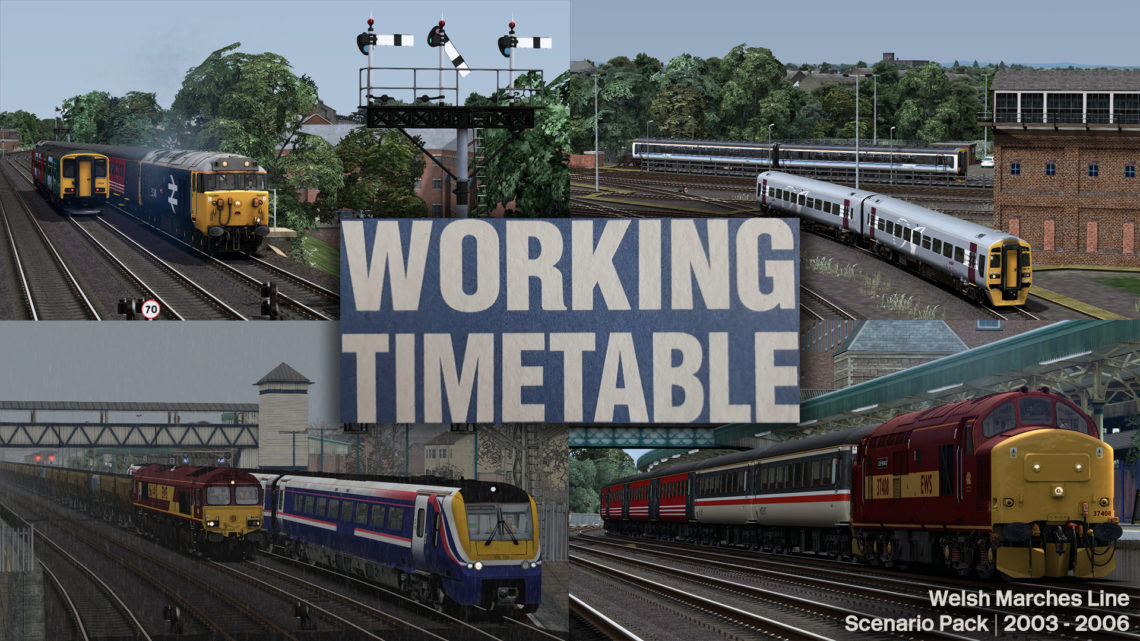 This pack has been researched using archive Working Timetables, rolling stock allocation and livery records, photographic records, and other source materials. It also draws heavily on my own memories, experiences, and my professional involvement with rail operations this route. What you see is hopefully a realistic representation of the varied workings and rolling stock to be seen between Newport and Shrewsbury on the delightful North and West route, also known as the ‘Welsh Marches’.

In order to do this, many add-on products are utilised. There are fourteen scenarios, giving around twenty hours of driving time. Key features include :

* Operational requirements such as train preparation, unit attachments, and end of day disposal.

Once you have downloaded the .zip file, extract the contents to a convenient place. Copy the enclosed ‘Content’ folder, and paste it into your Railworks folder – Generally found here, unless installed on a different drive :

In the simulator all scenarios are prefixed :

There are several locations on this route where differential speed restrictions apply – that is where one speed applies for certain types of train, and another for the rest. Between Newport and Hereford, the lower value speed applies to freight trains, and the higher value to all passenger trains. Between Hereford and Shrewsbury, the lower value speed applies to all trains not formed of multiple units, whilst the higher value is for multiple units only. This is reflected in these scenarios, and corresponding notes are included where necessary.

The split of the Wales & West franchise into Wales & Borders and Wessex Trains left a few anomalies of cross-working, a legacy of many varied through services. The weekday working between Portsmouth and Liverpool was a joint service, ownership changing at Newport. As it was an out-and-back working from Fratton depot, it was formed of a Wessex Trains unit. Drive the return working between Shrewsbury and Newport, calling at all stations.

Signalling problems at Runcorn have delayed this service and it is currently 37 minutes late. It’s not too bad though, this train is meant to stand at Hereford for 35 minutes, to allow a fast Manchester to Pembroke service to overtake. That train has run in front of your train from Crewe, so all being well you should arrive in Newport close to booked time. At Newport, a portion from Cardiff Central is booked to attach to this train, continuing then as 4 cars through to Portsmouth. The Level Crossing Manager has imposed two 40mph emergency speed restrictions due to vegetation obscuring sighting, one between Ludlow and Woofferton, and one approximately 2 miles north of Leominster. There is also a 50mph temporary speed restriction for passenger trains across a bridge approximately 3 miles south of Cwmbran. Year : 2003.

150252 has been stabled in Shrewsbury spare since this morning, after covering for a class 158 on the first leg of a Cardiff to Manchester service. A 158 was available in Shrewsbury and was used to take over the diagram. 150252 is now required back in Cardiff to ensure that the fleet balances for tomorrow. Prepare the unit from cold as per the manual. There will be a unit swap on your booked service. The class 158 arriving from Holyhead will be staying in Shrewsbury. Once on your way you will call at Ludlow, Hereford, Abergavenny, Pontypool & New Inn, Cwmbran, and Newport. Remember to set the destination blind which has been left on its setting from this morning. Year : 2006

Monday 3rd April 2006 was the first weekday since the demise of Wessex Trains, which had been absorbed into the First Great Western franchise. That morning there was some confusion on Canton depot that saw a former Wessex class 158, that had transferred to Wales and Borders, being mistakenly sent to Portsmouth. As a result 158741 which was on loan to FGW from First Scotrail ended up going to Manchester and back on a Wales and Borders diagram, being swapped back with the other unit on return to Cardiff this afternoon. This service calls at all stations between Newport and Shrewsbury. Due the ongoing Manchester South resignalling project, services from south Wales to Manchester are diverted via Warrington Bank Quay and Newton-le-Willows to terminate in Oxford Road station. Year : 2006.

It’s Friday 23rd December and the Christmas getaway is in full swing. This run begins with you awaiting your platform at Newport, as the Central Trains service to Nottingham is taking time to board everyone (platform 4 was not in use at this time). When you do get the signal, you will be calling at Newport, Cwmbran, Abergavenny, Hereford, Leominster, Ludlow, Craven Arms, Church Stretton, and Shrewsbury. As well as extended station dwells because of the amount of people travelling, the weather conditions are not great. At this time all ATW services run via Warrington to Manchester Oxford Road, due to the Manchester South resignalling project. Class 175s had around five diagrams over this route at this time, as the operational contract to provide nine units per day to First Trans Pennine Express was still in force. Year : 2005.

It’s Saturday 23rd August 2003. In preparation for the Rugby World Cup later in the year, Wales are playing England this afternoon in a warm-up match. Wales and Borders have three loco-hauled services booked over the North & West before the game, and the same amount returning, to enhance capacity. Drive 37408 on an empty stock positioning move to Hereford in readiness for one of these trains.

Ensure the ETH is on to supply the air conditioning, lights and door locks. In 2003, one of the Rhymney-based class 37s is booked to run through from Rhymney to Fishguard Harbour and return. In order to keep that rake of stock on the Rhymney line all day for rugby capacity, Wales & Borders’ ingenious service planner (me!) arranged to combine the Fishguard service with one of the loco-hauled additionals from the Crewe direction. This set has to run down empty early because of pathing issues. At Hereford, it will form 1Z37 09.37 to Fishguard Harbour which you will drive as far as Newport in the next scenario (see below). Maximum speed is 80mph. Where split line speeds exist on this section, the LOWER value limit apples to this train. Due to the reduced brake force available, if the line speed is 80 or 85mph you must not exceed 75mph. Year : 2003

Having brought the empty stock from Crewe down to Hereford in the previous scenario (see above) you will now be driving the passenger service as far as Newport, calling at all stations. Maximum speed is 80mph. Where split line speeds exist on this section, the HIGHER value limit apples to this train. There is a 30mph temporary speed restriction in place around a mile before Tram Inn, and a 40mph temporary speed restriction approaching Abergavenny station. Due to the reduced brake force available, if the line speed is 80 or 85mph you must not exceed 75mph.

In 2006, Arriva Trains Wales hired-in 50031 and 50049. One of their first duties were additional services on the North and West route around Easter, to take some of the pressure off the regular DMU-operated services. Drive 50049, with 50031 dead in tow on the rear, on this additional train. You have been checked outside Shrewsbury as per your schedule for a Chester to Birmingham service. Once underway, you will call at Shrewsbury, Ludlow, and Hereford where you shall be relieved. This train was timed to connect out of a Glasgow to Euston train at Crewe, and was a relief to the 11.33 Sprinter from Manchester Piccadilly. Ensure the ETH is on to supply the aircon, lights and door locks. You begin in NRN area 065, and will change to area 040 after Dorrington. On this section of the route, where split speeds exist the LOWER value speed applies to loco-hauled trains. Due to the reduced brake force available, if the line speed is 90mph you must not exceed 80mph, and if it is 80 or 85mph you must not exceed 75mph. Year : 2006.

With snow falling, you are in charge of this peak time short working to Abergavenny, which is booked to return empty to Cardiff before forming the 17.38 service to Swansea. Year : 2015.

On a fine June evening you are driving the final leg of the last northbound service of the day over the Central Wales line. Due to a late-running Cardiff to Holyhead service, you are being held on the branch to follow that service from Craven Arms. After calling at the station, then surrendering the single-line token, you will call at Church Stretton, and Shrewsbury. After detraining you will then attach this unit to a class 158, and berth them on Abbey Foregate Sidings for the night. Due to a shortage of class 153s, you have 150278 on this service tonight. Year : 2006.

On an unsettled Monday afternoon drive this heavily loaded train of ballast between Moreton-on-Lugg and Hereford. This train runs three times a week feeding stone for the construction industry from Tarmac’s quarry here at Moreton-on-Lugg. The train recesses in East Usk Yard until 03.15 tomorrow morning before heading up the Great Western Main Line to reach Hayes terminal just after dawn. Your maximum speed is 60mph. Please ensure you release brakes on these wagons gradually to avoid heavy snatching of the couplings. Year : 2006.

Having been recessed at Hereford for a southbound passenger service, resume your journey with your load of stone. The Holyhead to Cardiff service has just arrived and you will then follow it south. No need to pick up speed too quickly, as the passenger train will need to pass Tram Inn before you can pass Hereford’s section signal. Your maximum speed is 60mph. Once again, remember to be gentle when releasing the brakes with these trucks, they can be quite troublesome – they might even give you a shove when starting away from Hereford. Year : 2006.

On a damp late April evening you are in charge of this northbound Enterprise service as far as Hereford, with one of the handful of class 37s remaining in service with EWS. These services were regularly used as a means of moving EWS’s remaining class 37s around the country. 37405 with its RETB equipment and RA5 route availability is required in Scotland for some up-coming engineering work. It will haul this train to Warrington, then hitch a lift behind a class 92 up to Mossend. You have a variety of traffic, including steel coil for Liverpool Gladstone Dock, scrap for Liverpool Alexandra dock, and empty timber wagons returning to Scotland. You will be driving as far as Hereford where you are booked to be recessed for a passenger train, and be relieved. Maximum speed is 60mph. There is a 20mph temporary speed restriction for freight around half a mile before Cwmbran station, and there is a 20mph emergency speed restriction near Abergavenny’s Outer Home signal. You are in NRN area 040. Year : 2006.

On a wet May morning take a loaded steel train as far as Hereford with 56072 at the business end. This train started from Margam and has called-in at Llanwern yard to pick up extra traffic. You will be driving as far as Hereford where you will be relieved. Be aware that these wagons can jerk a bit when the brakes are released and the train is still moving. Maximum speed is 60mph. Year : 2003.