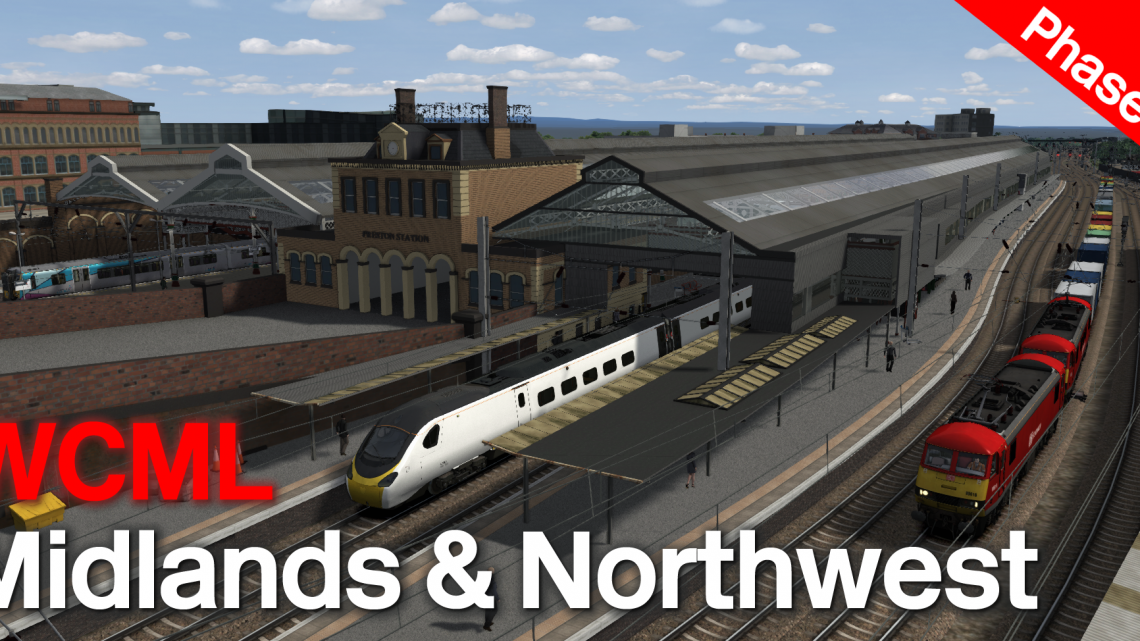 Phase three of the route completes the route to Birmingham in the south and Preston to the north. It adds approximately 21 miles of route and finally completes the West Coast Mainline via Birmingham. New stations on the route include Birmingham New Street, Smethwick Rolfe Street, Smethwick Galton Bridge, Euxton Balshaw Lane, Leyland, and Preston. Custom models are included for all. Other models include the bridge over the river Ribble, custom signals including the new VMS signals at the southern end of Preston.

Other updates include some optimisation to the route and seven new scenarios depicting the various parts of the route. Issues regarding Liverpool Lime Street have also been fixed.

Phase two of the West Coast Mainline Midlands & northwest adds route between Stafford to Sandwell & Dudley and Weaver Junction to Wigan North Western. These sections include some well known railway landmarks such as Warrington Royal Mail (Dallam Royal Mail) Terminal, Acton Grange junction and the viaduct over the Manchester Ship canal, Wolverhampton and the first part of the industrial run into Birmingham New St. Also included are the new VMS signals which are commonplace throughout the west midlands.

This phase significantly furthers the project adding another 42 miles. (23 miles to the south and 19 miles to the north). This brings the overall route mileage to 110 miles (82 miles Sandwell & Dudley to Wigan North Western + 28 miles Weaver Jn to Liverpool Lime Street) Further updates include general performance tweaks and track layout updates across the route to correct errors.

Phase one of the West Coast Mainline Midlands and Northwest is the route between Stafford and Liverpool Lime street. This 60 mile route runs from the heart of Staffordshire, through Cheshire and into Merseyside. The route features some iconic landmarks including the Ethelfleda and Silver Jubilee bridges which span the river Mersey between Widness and Runcorn. Dutton Viaduct, which is the longest single viaduct on the WCML and spans the river Weaver near Acton Bridge.

'Missing Link' is a project to complete the WCML between London and Scotland. Originally Stafford to Preston was missing and it stood this way for a long time. Now the gap has been closed and before long, we hope eliminated altogether. This brings us to the next big project; In 2019 the full ECML was released for Train Simulator - this combination four routes was a groundbreaking achievement meaning that for the first time a non stop, full run between London and Scotland was possible. 393 miles of driving on the ECML was possible. Sadly the WCML was not in the same boat. At that time the furthest north from London that was possible on Britain's busiest mainline was Birmingham. Now, the ultimate aim is to replicate the London to Scotland link on the west coast. Building London to Glasgow and Edinburgh via Birmingham and the Trent Valley will be an extensive project calling on the skills of numerous people. The route is hugely varied and will incorporate Britain's highest average speed long distance (non HS1) journey: London to Warrington.

These aggregate requirements are purely related to the scenarios. You do not need any of of these for the route to function.

- Download the latest installer from your account
- Run the installer as administrator - It may be necessary to disable your antivirus software temporarily as the installer is sometimes flagged as a false positive.
- Enter your alanthomsonsim.com account details
- The installer will install the route automatically for you

N.B. If you have any third party Class 390 reskins and use the Armstrong Powerhouse Class 390 Sound Pack, please re-download the sound pack from AP and install after completing the route installation.

The route installs as "West Coast Mainline Midlands and Northwest" and is Quick Drive compatible.

There are future phases for this route which will be released as they are completed. The overall route is proposed to connect Rugby, Preston, Liverpool and Manchester.

Found a problem? Get in touch

You can download alternative supplementary files for this route here although please do not use these if using the automated installer.