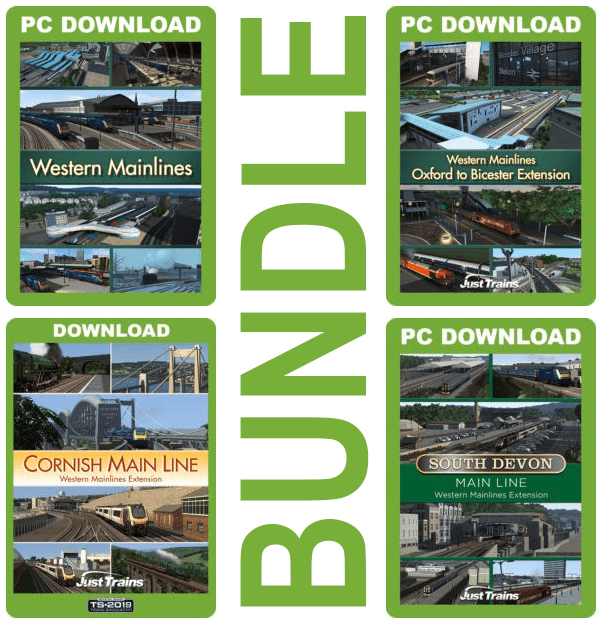 This is a bundle of the following products;

Together these form the full route from London Paddington to Penzance, better known as the Great Western Mainline (GWML)

Set in the years between 2013 and 2015, Western Mainlines consists of three newly developed routes running from the terminus station of London Paddington to Bristol, from Bristol to Cardiff and from Bristol to Exeter, all connected seamlessly together in this one pack.

Featuring both the south lines through Box Tunnel and the northern lines via Bristol Parkway, as well as the lines to Oxford, Western Mainlines features 60 stations and numerous new custom assets along with a set of 18 extensive scenarios. The route is Quick Drive enabled.

Paddington to Bristol – this line is the main route running East-West in southern England. Starting from its grand London terminus at Paddington, it runs out to Bristol and from there to Cardiff in Wales and south-west from Bristol to Exeter in this simulation. The line is largely non-electrified, but in the late 1990s the section from Paddington to Heathrow Airport was electrified. There are plans to electrify all of the real-world route but this work is taking time and has been beset by numerous delays.

Bristol to Cardiff – the route from Bristol to Cardiff is part of the South Wales Main Line and continues the westward journey. It breaks away from the main Paddington-Bristol line at Royal Wootton Bassett and continues under the River Severn using the Severn Tunnel. There are plans to electrify the whole of the equivalent real-world route but, again, there have been numerous delays.

A new set of textures for the default Class 166 DMU is included as well as all the wagons from the Just Trains VKA/VGA Wagon PlusPak for use in some of the freight scenarios.

Drive on one of the newest lines on the UK rail network! The Oxford-Bicester line was opened in October 2015, superseding the previous single track with 100MPH-capable dual track and employing the latest Integrated Lightweight Signals (iLS). All the previous level crossings except the one at London Road, Bicester, have been closed and have been replaced with bridges. The two stations at Bicester Town and Islip have been totally rebuilt and a brand new station called Oxford Parkway has been built to the north of Oxford. These three stations are state of the art, and Bicester Village station (as it has been renamed) and Oxford Parkway employ amazingly light and airy architectural designs.

Set around 2013, this Train Simulator route starts to the north of Highbridge and Burnham station and heads in a south-westerly direction down to Plymouth via the picturesque Dawlish area.

The total length of the route is approximately 100 miles: 48 miles from Burnham and Highbridge to Exeter, and 52 miles from Exeter to Plymouth.

The Cornish Main Line runs for 78 miles from Plymouth to Penzance at the southern-most corner of the UK, winding through the atmospheric valleys of Cornwall and passing many towns and scenic villages along the way.

This bundle provides more than 300 miles of driving in Train Simulator and represents the full route between London and Penzance.

Alan Thomson Simulation subscribers enjoy a further 10% off this and all payware on the site. There has never been a better time to take out a subscription