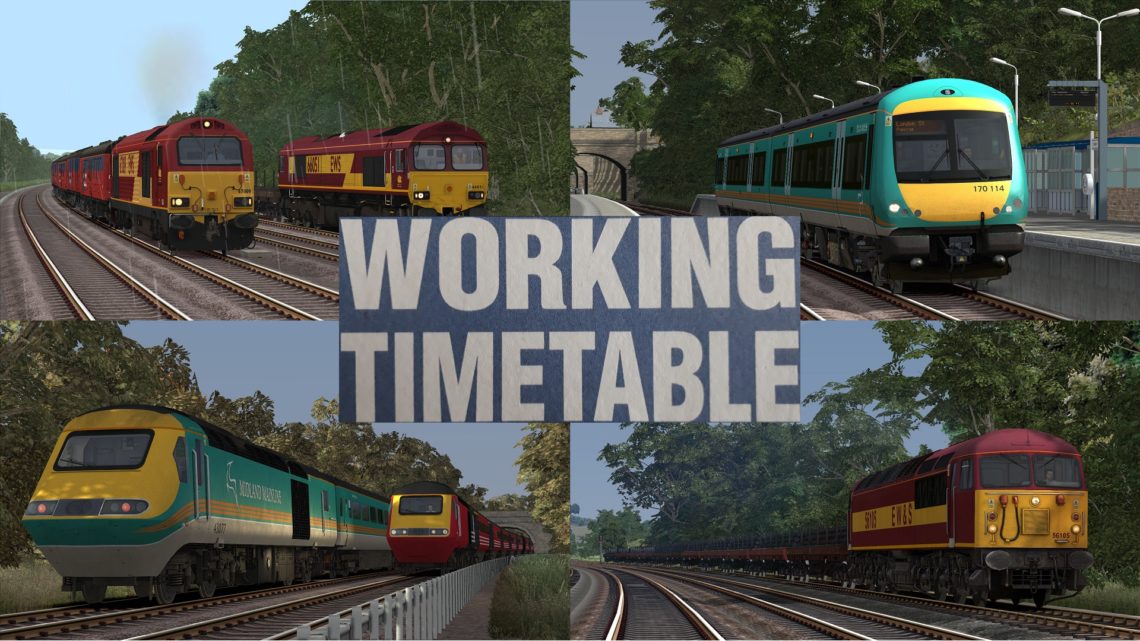 Scenario Pack 3 features 16 scenarios for the Just Trains Midland Main Line Derby to Sheffield route. Based on the Summer 2000 and Winter 2000/2001 timetables, a variety of passenger, charter, mail, and freight workings are represented. Available now from Alan Thomson Sim. https://alanthomsonsim.com/?download=505126

This pack has been researched using archive Working Timetables, rolling stock allocation and livery records, photographic records, and other source materials. What you see is hopefully a realistic representation of the varied workings and rolling stock to be seen between Derby and Sheffield during the year 2000, still the early days of privatisation. From version 2.0 of this pack, workings on the Derwent Valley line to / from Matlock are also included.

In order to do this, many add-on products are utilised. There are eighteen scenarios, giving around twelve hours of driving time. Key features include:

* Operational requirements such as unit attachments, and end of day disposal.

Once you have downloaded the .zip file, extract the contents to a convenient place. Copy the enclosed ‘Content’ folder, and paste it into your Railworks folder – Generally found here, unless installed on a different drive :

In the simulator all scenarios are prefixed :

Saturday 15th July saw Barrow Hill Roundhouse host an open day. You are in charge of the first leg of a returning Hertfordshire Rail Tours excursion that also gave the option of a trip along some freight only lines. Having visited Tinsley, Deepcar, and Bolsover Castle, the stock of this tour has been brought to Derby for servicing prior to returning to London. You will drive empty stock to Chesterfield where the return service will start. You will then call at Sheffield where those who have been to Barrow Hill for the day will rejoin the train. You will be following the northbound “Dorset Scot” from Derby. This loco will work to Retford, where it will hand over to 86243 for a dash up the East Coast Main Line.

The recent introduction of class 170s on Midland Main Line has allowed various new services to be introduced. On a fine morning, you are driving one such service from Matlock as far as Derby. Joining the run at Ambergate you will be calling at Belper, and Duffield. In Derby this service combines with another unit that starts in Burton-on-Trent, providing convenient through links. From version 2.0, there is an alternative version of this scenario which starts from Matlock and covers the Derwent Valley line (see below).

The recent introduction of class 170s on Midland Main Line has allowed various new services to be introduced. On a fine morning, you are driving one such service from Matlock as far as Derby, calling at all stations. In Derby this service combines with another unit that starts in Burton-on-Trent, providing convenient through links.

On a fine August Friday, you are driving this Midland Main Line Turbostar service that provides a direct link for Barnsley and other destinations though to London. You will call at Chesterfield, Belper, and Derby. Another driver will then take over for the run to London. There is 40mph emergency speed restriction in force just to the north of Duffield station. This service will be overtaken by a Nottingham to St. Pancras HST at Leicester, allowing passengers to change and arrive in London twenty minutes earlier than if they remain on this train. All Midland Main Line class 170s are two-car sets at the moment, though ten centre cars are on order for delivery next year.

On a pleasant Sunday afternoon you are in charge of this Virgin Cross Country service, one of only a few through this area that are formed with class 47s and mark 2 stock. Delays around Birmingham mean your service is around 20 minutes late, and will be following a Midland Main Line service from Derby. You call at Chesterfield, and Sheffield. Due to a shortage of class 47/8s, you have RES-liveried 47772 on hire from EWS.

Under British Rail, Eastern Region HSTs were regularly employed on Cross Country weekend services during the summer. Last night one of Virgin’s HSTs failed to make it to Neville Hill, leaving them one short for the morning. Fortunately GNER, their maintenance provider at that depot, were able to field one of their own sets. It was thus hired and used on the Summer Saturday Newquay service, as this would return the set back to Neville Hill. You are in charge of the return working between Derby and Sheffield.

On a fine late September afternoon, drive the last leg of this peak time departure from London to Sheffield. You will call at Chesterfield, and Sheffield. This set will then form the last southbound HST working to St.Pancras from Sheffield at 1924. The leading power car is one of the handful at this time fitted with the VP185 engine.

On Summer Sundays, morning and early afternoon Central Trains services on the Liverpool – Norwich circuit run via Derby due to engineering works on the route via Alfreton. Drive a morning departure from Derby bound for Liverpool. You call at Chesterfield, Sheffield, and Dore & Totley. This is one of few Central Trains services that call at the latter station. As it is Sunday morning, weekly track patrols and inspections are taking place in several locations, and there may be some infrastructure issues.

On a bitterly cold November morning, drive the first southbound Virgin XC service of the day from Sheffield. You will call at Chesterfield, and Derby. There is a 30mph TSR in place in the Dore area, and a 20mph TSR shortly after Chesterfield station. This service provides a commuter link to Birmingham, arriving at 0736. This loco’s diagram will see it visit Manchester, Bristol, Preston, and Blackpool North today, before finishing up at Longsight depot in Manchester.

On a wet May afternoon you are in charge of a southbound Royal Mail working between Sheffield and Derby. Loading and unloading has been completed at Sheffield and we are just awaiting our booked path behind the 1502 Newcastle to Plymouth Virgin Cross Country service. You will drive non-stop to Derby where further mail will be loaded and unloaded, and there you shall be relieved.

Note : There is a small glich affecting this scenario due to a TPWS grid (not present in 2000!). There are instructions in the scenario to avoid the problem.

On a wet Autumn morning, drive the first leg of one of Northern Spirit’s four departures of the day from Chesterfield. You call at Dronfield, and Sheffield. It’s slippery out there so be careful.

On a damp July evening drive a round trip from Derby to Matlock and return. The last crew have not set the destination blinds so please set them to show ‘Matlock’. Once underway you will be calling at all stations to Matlock, and all stations back to Derby. There is a 15mph emergency speed restriction in the Cromford area.

On a September morning you are working one of the few Norhern Spirit services that provides a service at Dronfield, as well as between York and Sheffield via Pontefract. This daytime out and back working from York is normally worked by a class 153 unit, but today one of the class 158s owned by West Yorkshire PTE has been substituted following a failure.

On an Autumn Saturday afternoon you are in charge of a southbound Freightliner working. Running a little early, you have been held at Clay Cross Junction in order to follow a southbound Virgin Cross Country service. You will drive as far as Derby where your relief is waiting.

On a Tuesday morning you are driving a Wales & West class 158 heading to Doncaster for a C4 overhaul. Unfortunately the transmission on the 57 car is not changing direction, meaning it is just idling and not providing power. This will be rectified during the overhaul. You are one of a handful of Gloucester-based Wales & West drivers who sign the route to Doncaster in order to perform these maintenance moves.

It’s a fine evening and this HST’s duties are done for the day, having just formed the 17.30 from St.Pancras. All that remains now is to head to Etches Park depot for overnight servicing and stabling.

You are in charge of a train of steel heading from Aldwarke in Rotherham destined for Wolverhampton Steel Terminal. Although booked for class 66 haulage, class 56s were regular performers on this flow at this time despite their depleted numbers. You have been regulated in Sheffield and will be driving as far as Derby.

The Winter is upon us and demands on power stations are increasing. Work an additional MGR service from Oxcroft (east of Chesterfield) destined for Ironbridge Power Station near Telford. As this is an additional working outside of the normal diagrams, Control have had to find spare traction. By coincidence, Toton depot had just released this pair of class 37s following preparation for this Autumn’s sandite season. As they required a trial run, this working seemed like a good opportunity!

** – From Update 1.1 there are two versions of scenario 1A51, one utilising the original Digital Traction / AP mark 1 coaches, and one featuring the new AP pack released in 2020.